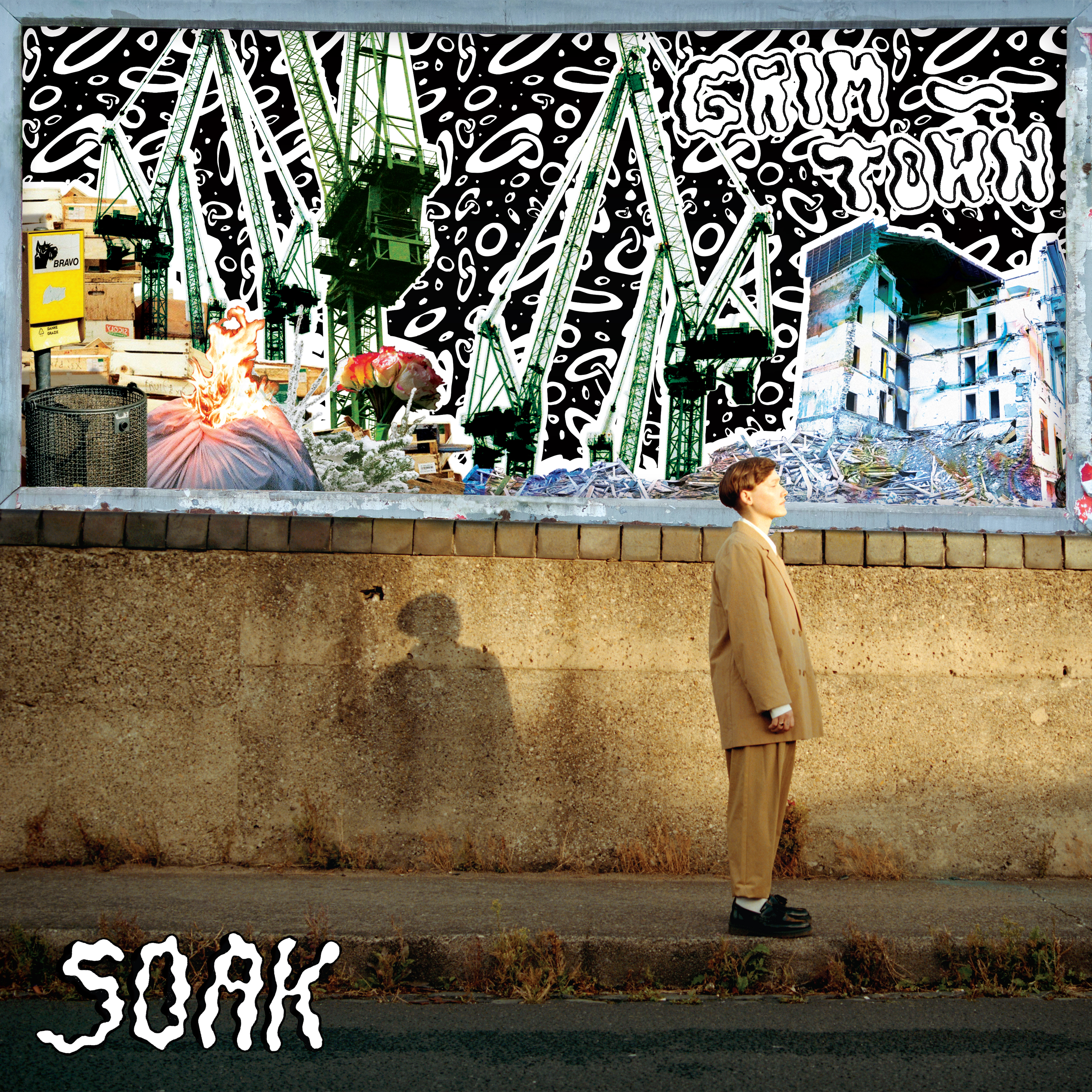 Though Bridle Monds-Watson’s moniker SOAK is a self-ascribed blend of soul /folk, her sound seemed more of a blend of dreamy pop with hints of folk in her 2015 debut, “Sea Creatures”—released when she was just 18. Her debut album, Before We Forgot How to Dream swiveled between youthful ruggedness and pointed maturity, sometimes husky and lost in teenage-tinged notebook stanzas while always swelling with a certain hope. Now, the Northern Irish artist returns with her sophomore album, GrimTown (out April 26th via Rough Trade Records). Bearing a weighty tracklist of 15 songs, Grim Town stretches SOAK into a range of sonic territories new for her, though not exactly anywhere new in the saturated genres of indie rock, folk, and dream pop.

Now 22 years old, SOAK has begun moving out of her teenaged fantasies and into a more poignant self-realization (and self-forgiveness) in Grim Town. “I was drowning, / my brain was a pool/” she sings in closer “Nothing Looks the Same”, “I’m pushing off the bottom”—she admits in “Life Trainee”, “let’s be honest, / I’m a work in progress.” Though there’s an abundance of reverbed bedroom pop, where her voice feels quite comfortable if a little snug (“I Was There, Technicolour Too”), the production has expanded considerably, often using gloomy instrumentation in a sickly sweet, upbeat way. “Nothing Looks the Same” uses it’s dreamy guitar as a glamorous, prom-night- esque hook; the 80s-synth undertons that punctuate “Fall Asleep, Backseat”. The problem is that among the 15 tracks, there’s a lot of fine tracks, but nothing really stands out on its own. And as the long runtime drags on, there’s an increase of ambient ballads in which SOAK’s voice is serviceable, but not quite rich enough to bolster interest even as the instrumentation predictably swells into climax. The strengths in Grim Town lie in the unpredictability of its instrumentation and its unique sound palette, though it’s not used in any consistently interesting way. One could highlight impressive chunks of songs, but not whole songs themselves.

Lyrically, Grim Town is a self-referential guide to your early-twenties: more romantically jaded than her teen years (she sings, “I don’t hurt no more” in “Everybody Loves You”), seeking to get out of her small home-city of Derry (the peppy “Knock Me Off My Feet”) and pardoning herself and those her age for the mistakes they make as they work their identities out, including a sluggish ballad about forgetting to brush your teeth after a party (“YBFTBYT”). Of course, we’ve seen this coming-of-age story countless times, so it’s hard not to compare her trajectory with that of other young artists, such as Lorde’s sophomore album, Melodrama, or even smaller independent acts like Girlpool; both of which feature a more unique, nuanced vision (reaction to fame; changing gender identity). That’s not to say there isn’t something relatable about SOAK that listeners could latch onto, but when her own sonic portfolio is so stretched thin, so does the identity.

Grim Town, SOAK’s followup to her debut, dips little toes into sounds, genres, and topics well tread by young artists. There are definite moments of strength and potential, especially in her maturing production, though a few strong trees don’t make a forest. Of the 15 tracks, I recommend “Maybe”, “I Was Blue, Technicolour Too,” and “Nothing Looks the Same”.