Portland indie duo, Corvair has released a new video for “Green (Mean Time).” The track, is from their self-titled, debut LP, drops February 19th via Paper Walls in the US and WIAIWYA in the UK. The clip was directed, shot and edited Corvair member Brian Naubert. Filmed in the Wallowa Mountains of Oregon over New Year’s weekend 2021.

About the song Corvair’s Heather Larimer says, “The song was written deep in the eerie spring of 2020 when COVID was first hitting hard.” She adds, “Things were sprouting to life but the world was shutting down. The title alludes to that tension, and also to Greenwich Mean Time, the standard time zone for the globe, as the singer declares that no matter where she runs, she will be setting her clocks to one specific place and person forever.” “Green (Mean Time)” follows a series of track releases from Corvair’s forthcoming release. Singles “Sailor Down” and “Sunday Runner” are available to stream now at Bandcamp and Spotify.

Larimer explains, “Being stuck in a house together with very little outside influence made us more emotionally raw, definitely weirder, and also more patient and intricate in developing the songs. And because we were in a bubble, cooking dinners from paranoidly-disinfected groceries and listening to old records, really disparate references from some of our favorite music ended up colliding in odd ways–an emotional Judas Priest bridge, an anthemic Pixies outro, a spacey keyboard sound from Steve Miller, Jeff Lynne’s acoustic guitar tone, a Carpenters-style lush harmony. I think it’s a wonderfully weird record, but also very in-your-face pop because what else are you going to do when the world feels like it’s ending?”

Separately, Naubert and Larimer have created or appeared on more than 20 records. Heather’s musical mainstay was the garage pop band Eux Autres, broadly hailed as a “veritable cult classic” band, radio-debuted by the legendary John Peel, and featured in many shows, movies and commercials. Brian is a longtime fixture of the Northwest rock community, having played in vital bands such as Tube Top, Pop Sickle, and Ruston Mire since 1993. More recently, Brian released his first solo record, Hoffabus and a record with the Pacific NW Supergroup, The Service Providers. 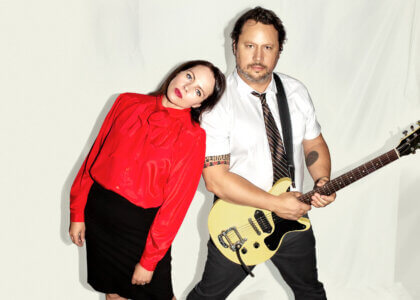