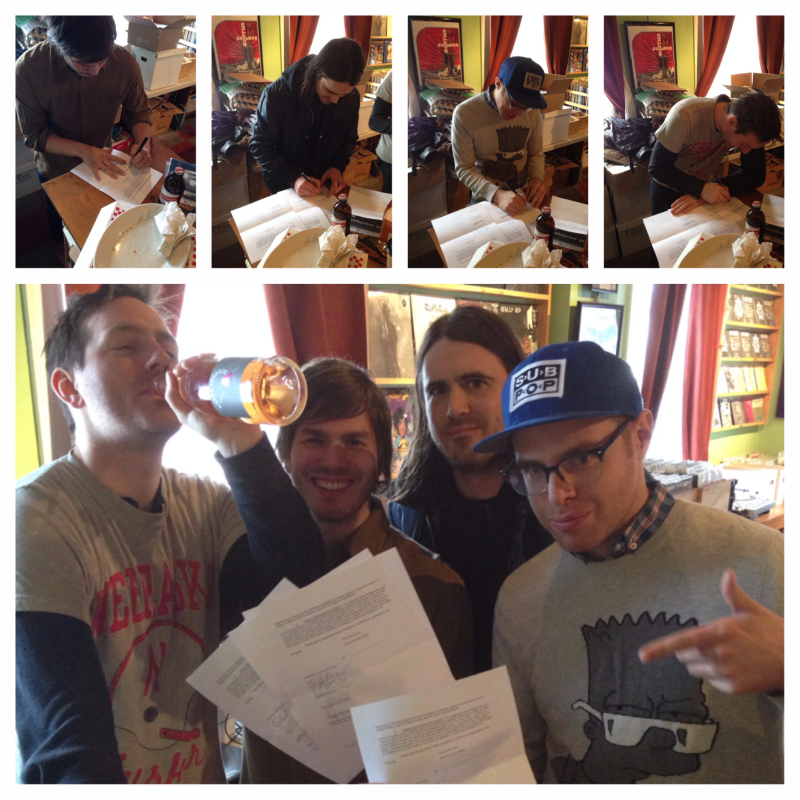 The Gotobeds have signed a worldwide recording deal with Sub Pop Records. The band has released material on Gerrard Cosloy’s 12xu label, including their debut LP Poor People Are Revolting. The Gotobeds will hit the road for a tour with Hardly Art recording artists Protomartyr, which begins with a hometown show on April 8th at Gooski’s and ends April 18th in Athens, GA at Caledonia Lounge (dates below).

A bit about the band, from singer/guitarist Hazy Lazer (real name TBD):

Around March 2009, shortly after I lost my job, I bumped into my longtime friend Parryman at an all-night art gallery and we talked about finally making a band stick beyond a couple of drunken, hazy practices. Pittsburgh at the time had a nice, Thatcher-esque feel thanks to the housing bubble bursting, so I was keen to do something beyond getting up at noon and trying to hit my favorite brunch spot. But not toomuch more.

I had all of these songs sitting around that didn’t make sense for my other band, Kim Phuc. Parryman wasn’t really a drummer and I wasn’t really a singer so it seemed natural that we’d try our hand at those things. We made long lists of bands and strange sounds we wanted to try out. Being from a city that has great bands but is removed from most things gave us time to gestate, and if you’re intelligent enough to read between the lines you know I’m covering for the fact that we were initially pretty terrible.

Arid Plateau took on bass duties once he made the correct decision to move from Chicago to Pittsburgh despite only knowing a couple of people here. As far as guitar players go, we had several in our infancy, but each of them turned out to be simply experiencing a moment of transitional chaos before they resigned themselves to the rat race. COOL U, who drummed in Kim Phuc, eventually asked to play guitar with us, which completed our final lineup.

We kicked around for a few years to find our footing. It’s easy to form a band with an initial sound or look that is someone else’s, but that’s always the least interesting way to go about things. So we tried on a few hats to figure out that they didn’t fit or they wouldn’t get us laid. Most of what we agree on his stuff with guitars in it. I wanted to be the Swell Maps and just make a big bunch of classic songs with junk on top, but we ended up with a mish-mash of DIY/Punk/Post-Punk/Indie sounds ala The Fall, early Pavement, Wire, Wipers, Mission of Burma, Sonic Youth, Total Control, Tyvek, Protomartyr, etc.

We approached our first LP in the fashion of The Replacements’ Let It Be, what with the cheeky title and grab-bag of disparate strands of rock. Every band is trying to incorporate too much shit, so we just made sounds that we all loved, and lucked into recording all the songs in one day. “Secs Tape,” “Jenna Rations,” and “Fucking Machine” are all first takes. The 90’s are back! We’re waiting to cash our checks.

Important note: The Gotobeds is one word. It’s someone’s name. We’re a punk family like The Ramones or the Osmonds. We’re not going to bed anytime soon.
Jah Bless – Hazy Lazer 2014.