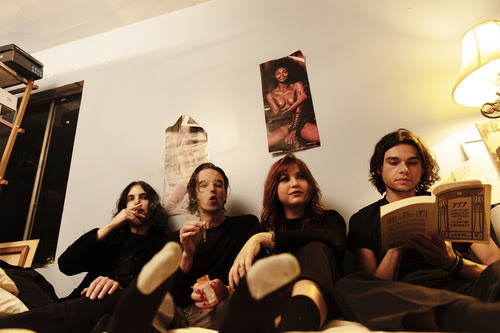 Los Angeles psyche-rockers Gateway Drugs have released their new single/video “Slumber.” The song is off their forthcoming release PSA, out May 8, via Future Shock. “The album retains their characteristic impassioned, noisy, reckless and melodic shoegazy, psychedelic sound, which Hellbound likened to “The Stooges meets My Bloody Valentine and the Brian Jonestown Massacre —a little dark, a little eerie and a little grainy and all intoxicating.” The full-length was produced by Produced by Sune Rose Wagner of the Raveonettes, the album was recorded live at Josh Homme’s Pink Duck Studios. The result is raw, wild and chaotic, much like the last few years of the band members’ lives. Liv, Noa and Gabe Niles, the three siblings that make up the LA-based quartet, are joined by longtime friend James Sanderson on bass/guitar, whom they met and formed an instant bond with back in 2010 while on a tour of the US.

Today they release their second single “Slumber,” featuring lead vocals by Gabe, the song is a reflection on unrequited love, with all the attendant rejection. The video however takes a different twist as the band invites viewers into a day in their life. “Videos nowadays tend to be overly cinematic or pretentious. The songs get lost and leaves little room for the listeners imagination. We wanted to keep it simple, sincere, and true to form, so we shot and edited the video ourselves”. With a sensibility steeped in rock ‘n’ roll rectitude, the band say “We hope you like it. Come hang with the gang.”

“Slumber” follows the release of the album’s lead single “Wait (Medication)”which is about “Falling in love with madness. When sustenance is stolen and your vice becomes your friend, your lover. Romanticization of loneliness and despair. The delight of debauchery and the consequences of excess,” according to the band. En route you’ll also also encounter musings that are a bit more personal, such as “I’m Always Around,” sung by Liv Niles, a real look inside a failing relationship. Meanwhile, “The Revolution Will Not Be Televised,” an allusion to Gil Scott-Heron’s ground breaking 1971 track, is perhaps the most overt expression of PSA’s overall theme. This fuzz-bass driven dirge is a take on how rebellion, protest, counter-culture and what they represent and mean have been manipulated, packaged, commodied and sold back to us in ads for jeans and car insurance. 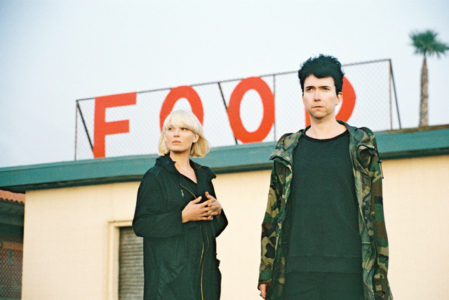