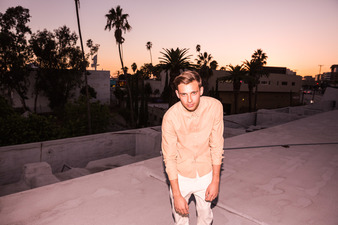 A new EP of remixes of Flume’s “Never Be Like You,” featuring Kai, is out today via Mom + Pop. Coming on the heels of Disclosure’s rework of the track, the new EP features previously unheard versions from Wave Racer and Teengirl Fantasy. Stream the Wave Racer remix here, and get the whole EP here.

“Never Be Like You” is the first track unveiled from Flume’s highly anticipated forthcoming album, Skin, coming later this year on Mom + Pop. The original has been streamed more than 48 million times since release after reaching #1 on Spotify’s Global Viral Chart and #1 on Hype Machine, as well as climbing up the Top 100 Shazam charts. After reaching the #5 most added at Top 40 radio last week, “Never Be Like You” is set to make its debut on the Top 40 chart next week with support in New York City, Los Angeles, San Francisco, Philadelphia, Miami and many more nationwide. The track is climbing charts across Europe and is a #1, double Platinum single in Australia, a first for Flume, as well as #2 and Platinum in New Zealand.

Consequence of Sound calls the song “a slow building romance” while Spin says “the new R&B look is a good one for Flume.” Watch the video for “Never Be Like You,” directed by Clemens Habicht, here.

Disclosure’s remix of the track debuted earlier this month via BBC Radio 1—The Fader praises the “pleading club track” while Stereogum calls it “a nice flip.”

Since the 2012 release of his self-titled debut, Flume continues to receive feverish support from fans and critics alike, becoming one of the first artists to top 200 million Soundcloud plays and reaching more than 366 million streams on Spotify. The New York Times’ Ben Sisario praises Flume’s “darkly textured electronic songs with a soulful edge.”

Flume is 24-year-old Australian producer Harley Streten. After releasing his debut in Australia in November 2012 on Future Classic, Flume experienced wildfire success winning 2013’s Triple J Award for Australian Album of the Year and four ARIA Awards for Producer of the Year, Best Male, Breakthrough Artist and Best Dance Release. He has since gone on to tour extensively worldwide including headlining Paris’ Rock En Seine for over 40,000 fans and sold-out, multi-night runs in New York, Los Angeles, London and Berlin. Read The New York Times’ lengthy profile on Flume here.