Human Potential, the solo project of composer/musician/producer/filmmaker Andrew Becker (former drummer of Dischord Records band Medications and Brooklyn experimental outfit Screens), has announced the release of I’m Glad You’re Alive, out February 7, 2020 via on Becker’s own, What Delicate Recordings. Ahead of the release, the artist has given us a taste of the album, with a video for “Fast Trash.”

The video for “Fast Trash” chronicles Human Potential’s long, strange trip as purveyors of enduring choogle, inimitable Roger Rabbit-styled dance moves, and most importantly, their fortified place in the annals of rock history.  The riveting visuals capture the bafflingly ageless, Human Potential (Andrew Becker and his oft forgotten hype man, J.Z. Haupt) at some of their most iconic performances, including Monterey Pop, Altamont and Monsters of Rock.  Along the way, the viewer is treated to the furor, fanaticism and all out chaos incited by their music and energetic live show, which has been called “entrancing, enigmatic and without peer” by the Wilmington News Journal and Delaware Today.”

Immediately after the release of his third album Human Potential album, “Hot Gun Western City”, Becker decided to, once and for all, leave the confines of his noxious, New York City lean-to, plotting an inspirational journey that he hoped would recalibrate his world-weary sonic paradigm and rectify his musical peccadillos.

After securing the appropriate licensing, Becker lifted off from lower Manhattan in a hypercolor dirigible determined to record the longest, weirdest and most goddamn carefree helium powered expedition in human history. But, just 3,000 miles in, the mighty zeppelin caught the tail of the notorious Santa Ana winds, sending the airship plunging towards the raccoon infested metropolis of Los Angeles.

Upon impact, Becker found himself well ensconced in an East L.A. rambler, outfitted with remarkably amateur recording gear, an entire wall emblazoned with Basil Kirchin ephemera and a wine cellar stocked with a vintage year, Cold Duck. At long last…revelation!

Becker immediately began toiling with the abecedarian apparatuses, attempting to synthesize the pop fizz of early Alice Cooper, the specious din of Jack Ruby, the dusty disorder of the Feederz and the clang, glang and glug of Don Cherry and Krzysztof Penderecki’s putrid, 1971 quasi-collabo, “Actions.” However, the result of this itchy experimentation took an unexpected turn, objectively sounding like “Dangerous Business,” as performed by Warren Beatty and Dustin Hoffman in the criminally underrated big screen masterstroke, “Ishtar.”

Completely and hopelessly confounded by his creation, Becker linked up with true blue rock n’ roll dude, Jarvis Taveniere, who promised to mix, affix and reign in the ravenous squawk if, and only if, there was a fresh steak of hake flown in from Bognor Regis every Thursday. AB obliged.

After what seemed like a time period longer than the Pilocene Epoch, Becker applied the last bit of scum to, “I’m Glad You’re Alive”. The result is not so much an album, but a philosophical treatise…an analytical and cosmological model of reconditioning that gives virility to the impotent and provides aural relief to the sonically infirm. Its myriad textures and disparate vibrations bandy through the ether, penetrating the tympanic membrane and worming their way deep, deep down into the fourth dimensional recesses of the eternal subconsciousness. It evokes, not only the sensation of rainy, lovelorn Surinamese nights, but the timeless nihilism of early 20th century Dadaism. Or, as Becker’s paternal great-step-grandfather, John Cage, once stated, ”I have nothing to say and I am saying it and that is poetry as I need it.” 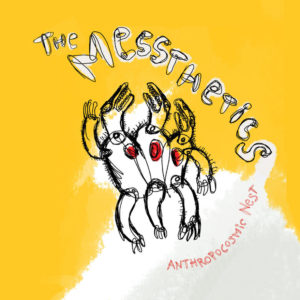