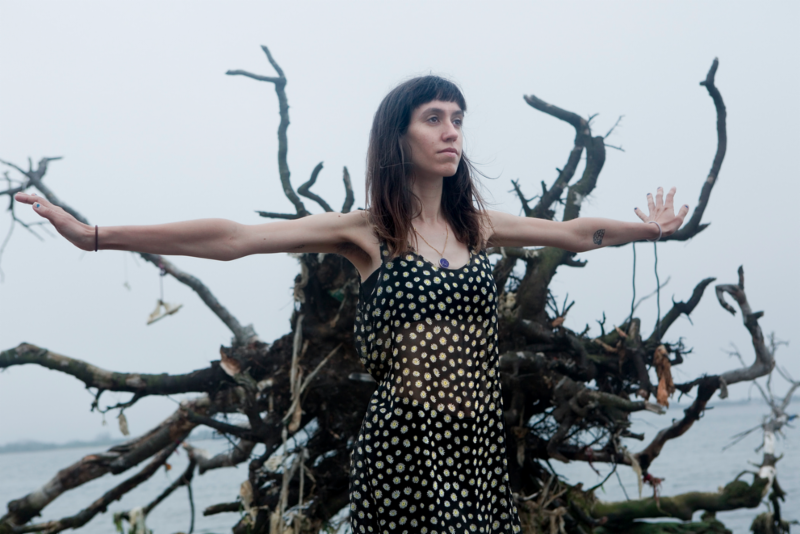 Eskimeaux is the recording project of songwriter and producer Gabrielle Smith. Smith started using the moniker in 2007, releasing experimental and noise albums through 2010, and developing the sound over the years into the realm of more structured songwriting (2011’s Two Mountains), EDM (2012’s Eskimeaux), and more recently, as evident in her new album, O.K., beat-driven and poetic bedroom pop. Eskimeaux is a founding member of The Epoch, a Brooklyn-based songwriting and art collective.

The recording process of Eskimeaux’s newest release, O.K., began with Smith alone in her bedroom, demoing out dozens of songs written over the course of two years. After recording over thirty demos, eleven of the songs were developed, embellished and arranged into a formal LP. After the backbone of the album was established, Smith brought in Jack Greenleaf of Sharpless to co-produce and polish the record. Greenleaf helped mix and produce the album, and spent countless hours adding arrangements, warming vocals, and making dramatic drops out of silences. O.K. features vocal cameos from all of the members of The Epoch, including Lago Lucia, Dave Benton and Mitski Miyawaki, as well as arrangement contributions from Henry Crawford and LVL UP’s Nick Corbo.

Today, Eskimeaux released a music video for “Broken Necks,” from her album, O.K. Eskimeaux have also announced a tour that kicks off this week, which includes Fall dates with Alex G, Girlpool and Told Slant and Winter dates with Colleen Green and Pity Sex. All dates below.