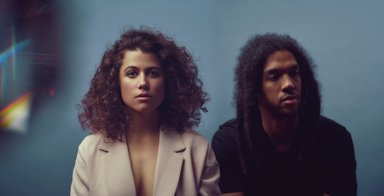 Electric Youth, are vocalist, Bronwyn Griffin and multi-instrumentalist, Austin Garrick. The duo have shared their new single, “ARAWA” (short for As Restless As We Are) today, the second off their album Memory Emotion, which will be released on August 9, 2019 via Last Gang Records. Electric Youth will perform next at a NY album release show on August 17 at Brooklyn’s Music Hall of Williamsburg. More dates will be announced soon.

Since releasing the soundtrack to Nicolas Winding Refn’s 2011 film, Drive, where their A Real Hero scored pivotal scenes, Electric Youth haven’t slowed down. After releasing their 2014 debut, Innerworld—hailed by Rolling Stone as “euphoric, wistful pop”—the Canadian duo spent the subsequent years working on new songs and film scores, in addition to collaborating again with Refn (Good Blood appeared on the companion soundtrack for his 2016 film, The Neon Demon, while their 2017 release, Breathing, an Original Motion Picture Soundtrack From A Lost Film, was released under his album series), as well as Gesaffelstein (Hyperion, Columbia Records) and Oscar-winning composer, Ryuichi Sakamoto (Async Remodels).

“Memory Emotion is much more outer-world, an album focused on the external world we live in and the way in which we interact with the world as a result of the emotions attached to our memories. Innerworld was finding that sense of self, developing and establishing a viewpoint, and Memory Emotion is us taking that viewpoint with us out into the world,” explains Garrick.

In order to get into a more personal, comfortable, and emotionally open headspace, Electric Youth moved their Toronto studio out of the commercial space they used for the past five years, and into their own home. The studio holds the recording gear that was used in the making of Memory Emotion: most notably the duo’s Yamaha-CS80 (widely considered the holy grail of synthesizers), their Lexicon 224 (a classic reverb unit used for Bronwyn’s vocals, which can be heard on everything from ethereal voices like Enya, to the atmospheric sound of the Blade Runner soundtrack), and their self-made B48 (a sample-based synthesizer built specifically for the new album, which houses 624 individual samples of Bronwyn’s voice and makes its emotive mark on songs such as The Life and Breathless).