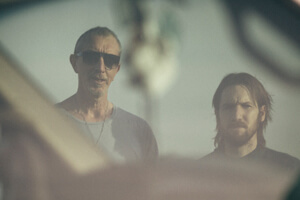 “Ekuté,” is the latest single from bassist Pino Palladino and musician/producer Blake Mills. The track is off their forthcoming release Notes With Attachments, due March 12, via Impulse/New Deal.

Palladino notes that “Ekuté” began as an idea he had at home in London with drummer Chris Dave, a fellow “huge fan” of Afrobeat pioneer Fela Kuti. “It just came from a one-chord jam that I liked the feel of,” he says. “The next thing we did on it was in New York, with Ben Kane, an engineer friend of mine who worked on some of D’Angelo’s stuff. We had Marcus Strickland come in, who had the idea for that multitracked bass-clarinet horn section.”

Not long after, Palladino invited Mills to add something to the track. The experience was Mills’ first encounter with Palladino’s original music and a seed that led to their collaboration on Notes with Attachments. “It was eye-opening to hear something that was repetitive, but still had so many different [directions] that it went in,” says Mills. “It was kind of a revelation, to work on a song in those terms.” That process touches every song on the record, which typically began with Palladino’s own melodic and rhythmic language and developed outward with references shared by the two musicians from West African and Cuban music, funk, jazz, and English folk.

Recorded in stages over two and a half years, Notes With Attachments brings together a preeminent group of musicians from the worlds of jazz, R&B, pop, and beyond: the drummer Chris Dave (D’Angelo, Anderson .Paak); the innovative saxophonists Sam Gendel, Marcus Strickland, and Jacques Schwartz-Bart; the keyboardist Larry Goldings (James Taylor, John Scofield); and others. It is both a producers’ album and a players’ album, exploring bits of musical vocabulary common to the two musicians, then defamiliarizing them.