James Righton (Klaxons,Shock Machine project) is set to release his debut solo album The Performer on March 20th, 2020 via the Soulwax-run label DEEWEE. Ahead of the album’s release, Righton has shared the video for track “Edie”, an ode to his young daughter. Speaking of the video, Righton comments: “For the ‘Edie’ video I wanted a sense of intimacy to chime with what’s at the core of a very personal song. The guys from Ill-Studio and director Hugo Campan delivered something that did just that.”

Campan adds: “The video is a visual essay which tries to translate the brightness and colours of nostalgia. It’s about the sweetness of remembering. A journey inside James’ world…just him and his piano, alone in a room repeating his track, thinking about it, getting lost in his thoughts…It’s an intimate approach to the song as the subject is very personal. That’s why we are very close to him in the video. By using vintage aesthetic textures, we want to feel like we are back in the old days. The objects are here to remind us the importance of your own mythology, which is a pure source of inspiration and how James and his souvenirs communicate where he is living and creating”

“I was really interested in the idea of using a live performance as the basis for a music video,” explains Hugo. “We even recorded James’ performance of the song to use to make it as close as possible to his live show. I wanted the video to delve into what music is at its most existential point: a human performance and a live experience. James is a great showman. He has so much energy, attitude and style. We filmed 43 consecutive takes to create something unique, and by the end of the process it drifted into a kind of abstract, surreal MTV performance.”

The themes and the visuals reflect his interest in the novelist Christopher Isherwood’s observations on Germany in the late 1920s and early ‘30s. It was a golden era for the Weimar Republic when decadence and non-conformity reigned before history took a far darker turn.

“I feel so many parallels with today, and I wanted to honour that period too,” Righton explains. “I wanted to create something that felt decadent and had that swagger while everything else is falling apart.”

It was recorded at a handful of locations, notably Righton’s home studio, Bryan Ferry’s Studio One. It was subsequently mixed by David and Stephen Dewaele (aka Soulwax, aka 2manydjs) at DEEWEE in Ghent, Belgium. 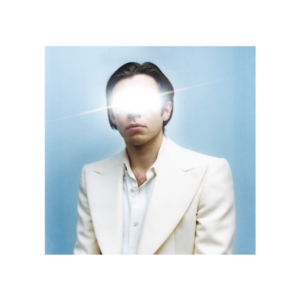