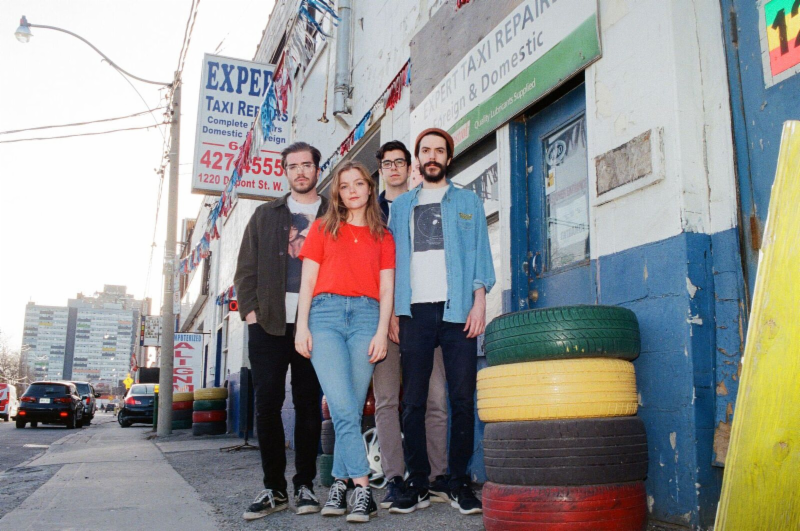 Dizzy, have released a new video for “Pretty Thing”. Singer and lyricist Katie Munshaw says, “We shot the video with Mac Boucher in Los Angeles. It was our first time in the city so the video is a magical, innocent, 4 minute first dance with L.A.” Dizzy are currently touring Europe before returning to Brooklyn, NY to play a rooftop show at Elsewhere on May 31st. The band is confirmed to perform at the UK’s Great Escape Festival in May and Austin City Limits Festival in October. The “Pretty Thing” single — out now via Royal Mountain Records / Communion Music. Dizzy has also supported acts like Tei Shi, Milk & Bone, and Bleachers on recent live dates.

In the suburbs, life moves at a slower pace; routine is valued and gossip fuels the local news. Dizzy — three brothers Alex (guitar), Mackenzie (bass), and Charlie (drums) Spencer, with his close friend since 9th grade Math class, Katie Munshaw — are a band who make music to combat the anxieties of this provincial ennui.

Like most small-town millennials, Dizzy went to high school basement parties, discovered the dangerous distractions of social media, scraped their knees, fell in love, and felt insecure. Unlike most of their peers, though, Dizzy ditched the routine high school to college to 9 to 5 trajectory to create story-songs out of their coming of age in suburbia. “Oshawa is dense. We all grew up in modern suburbia so there’s an arm’s length between my neighbour’s house and mine.” Said Munshaw. “Making music always stemmed from my being overly sensitive about everything, so when you’re that close to so many people you’re bound to meet the essential characters that screw you up enough to start writing about them. Oshawa introduced me to friendship and heartache and change while keeping me bored enough to sit at home and write about it.”