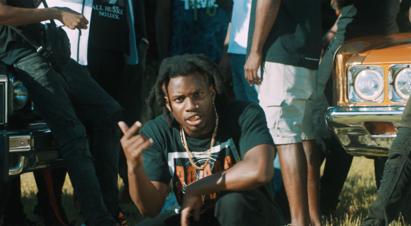 Denzel Curry shares a new single, marking his first official release since the release of his album, TA13OO in 2018. RICKY, named after Denzel’s father, is an introspective look at his childhood in Miami, with Denzel delivering powerful memories from his youth and detailing the wisdom his father passed down to him. Denzel will join Billie Eilish on tour across North America, beginning May 29 in San Francisco.

The single’s accompanying video, directed by BLACK BALLOONS collaborator, Twelve’len, captures scenes of Denzel’s childhood in Miami. The video was filmed in the backyard of MMA and brawling legend Dada 5000, where Dawg Fight, the documentary on the backyard brawling scene in Miami, was filmed. Denzel’s late brother, Treon, was actively involved in backyard brawling and often fought in this same yard during Denzel’s childhood. The video also features Dada 5000 as a referee and an appearance by Chocolate, a fighter who was featured in the documentary.