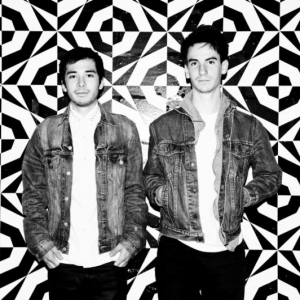 Today LA-based duo De Lux takes the idea of having a song stuck in your head to new levels with the video for their single, “Better At Making Time.”

Last week, Scion Audio Visual released the five-track debut EP (as a free download) from De Lux.The band is also set to release its debut full-length with the Innovative Leisure label in early 2014.

De Lux are a post-disco dance-punk DIY duo that sound like they could have come out of 1979 or 1982 just as easily as 2013. Founders and multi-instrumentalists Sean Guerin and Isaac Franco (who are both currently 22) didn’t meet so much as simply appear to each other, sometime before high school ended and after learning to correctly fall off skateboards began. Even at age 18, however, it was a connection that had been years in the making.

Sean began making music at 15 and had spent recent years recording and re-recording his own songs. Isaac had been on a strict diet of classic and obscure disco and boogie music since he too was 15, figuring out the original source of hip-hop’s greatest samples thanks to an older brother with a DJ sideline and an enviable record collection. They were even in a band together, prior to De Lux’s inception, and both were in pursuit of the same musical goal: the groove, which, they say resides where the bass and the beat align in such a perfect way that you want a song to go on forever. Just before one particular practice of that other band started, Isaac began playing a bass-line that grew to become “Better At Making Time.” From that moment on, their collective pursuit of the groove, was known as De Lux.