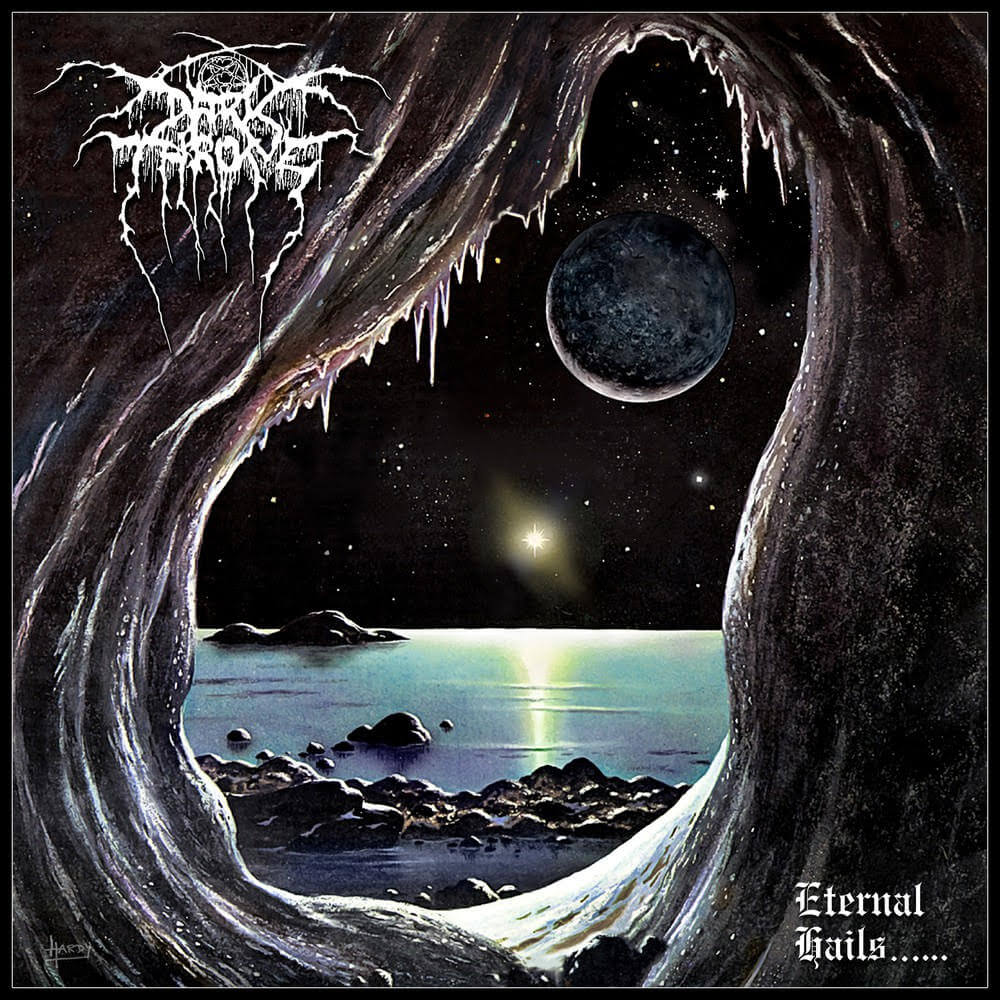 Darkthrone returns with their 19th(!) studio album Eternal Hails. It sees the band picking up from 2019s Old Star with more of their self-described epic black heavy metal. While it sounds like a continuation, this new album has a sound all its own. There are some elements present in the songs that sound fresh. With five tracks spanning over 42 minutes, these are some of the longest songs the band has written. It seems the goal this time was to create as much of an epic feeling as possible.

Darkthrone has gone through many musical phases over the years and has never been content to stick to one sound. They began in the late 80s as teens composing death metal demos and their 1991 debut Soulside Journey. They would experiment with punk and classic heavy metal-inspired albums but are most well known for the early 90s trilogy of A Blaze in the Northern Sky, Under a Funeral Moon, and Transilvanian Hunger. These records had a profound impact, still felt today, rightfully so. They are cornerstones of the black metal genre. Despite their legendary status with so many fans, the band seems to have no interest in returning to that sound. So with Old Star, Darkthrone started to introduce elements of doom metal. Eternal Hails brings that influence even more into focus. Drummer, songwriter, and lyricist Fenriz has called the 1986 debut album Epicus Doomicus Metallicus by Swedish doom metal band Candlemass a lifelong inspiration. With Eternal Hails, he sought to create epic songs in the style of that album. After recording themselves with a portable 8-track machine for years, for this album, they headed to Chaka Khan Studio in Oslo for the first time. This studio environment has changed nothing as far as the approach is concerned. The production sounds more lo-fi than Old Star but with a great natural sound to the drums. Nocturno Culto’s vocals continue to stand out. He even takes a guitar solo in Voyage to a Northpole Adrift.

Unfortunately, the bass is reduced in the mix to a barely audible rumble in the background. Fenriz makes a vocal appearance on the track Hate Cloak to pronounce the album title. Much like when he vocally introduced Nocturno Culto on the now-classic song In the Shadow of the Horns, this is the kind of stuff I love to hear him do as his character shines. Opening track His Masters Voice opens with guitars that almost have a clean chorus sound before going into one of the more upbeat songs on the album. The song eventually changes gears with a much more doom-laden feel before ending again with the intro guitars. Wake of the Awakened musically sounds like the last album and immediately reminded me of the opening track from that record, I Muffle Your Inner Choir. Then just after the 2-minute mark in the song, atmospheric keys are introduced, a sound not heard much in the music of Darkthrone. Lost Arcane City of Uppakra has a distinctly 70s prog vibe with spooky keys returning in the outro to close the album.

There is a lot to absorb in these songs. I enjoyed some of the new elements Fenriz and Nocturno Culto introduced here. There are some fantastic riffs as well though I feel the album may have been stronger if some of the ideas had been split and used to create a few shorter tracks. One thing for sure, the album is bound to cause discussion amongst fans and continue our perpetual interest in whatever they do next.