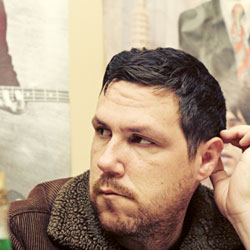 Damien Jurado is the sort of songwriter who straddles rock’s past and future, and with each record contributes a new chapter to an ever-fruitful body of work. Before we move onto the next chapter, we look back at his first album with Secretly Canadian. Released in 2003, Where Shall You Take Me?, was his fifth full-length, and is a collection of ten Raymond Carver-esque vignettes terror and bliss in Middle America. Arriving two decades after Springsteen’s Nebraska, Jurado put the darker, more complicated side of the heartland back on the map with his tales of young love (some requited; some not), innocent fun and bloodshed.

Mostly acoustic with very sparse band arrangements – with the notable exception being the old live favorite “Texas to Ohio,” which sounds like a Scarecrow-era Mellencamp hit–Jurado displayed the songwriting talent that turns back the hands of time to a place in which his tunes sound like they’ve been floating around, passed down from generation to generation. Celebrating the 10th anniversary of this fine release comes a deluxe gatefold 2xLP vinyl reissue, incorporating unreleased basement reel demos, and the Just In Time For Something EP (never before released on vinyl).

Secretly Canadian offers “Omaha” from these basement reel-to-reel demos for streaming today. You can stream “Omaha” here, and you can order the double LP here at SC Distribution.

This reissue is dedicated to Damien’s late label-mate, Jason Molina. “If it were not for Jason Molina, I may not have ended up on the Secretly Canadian record label. The guy practically twisted one arm behind my back, and with the other, walked me through the front door of where I am today. I am eternally grateful for the guidance, knowledge, influence, and inspiration he so graciously shared with me. The reissue of this album is dedicated to his life and legacy.”

Where Shall You Take Me – Deluxe Reissue Double LP

I Can’t Get Over You

I Can’t Get Over You

LP2/SIDE D (Just In Time For Something EP)

Night Out For The Downer