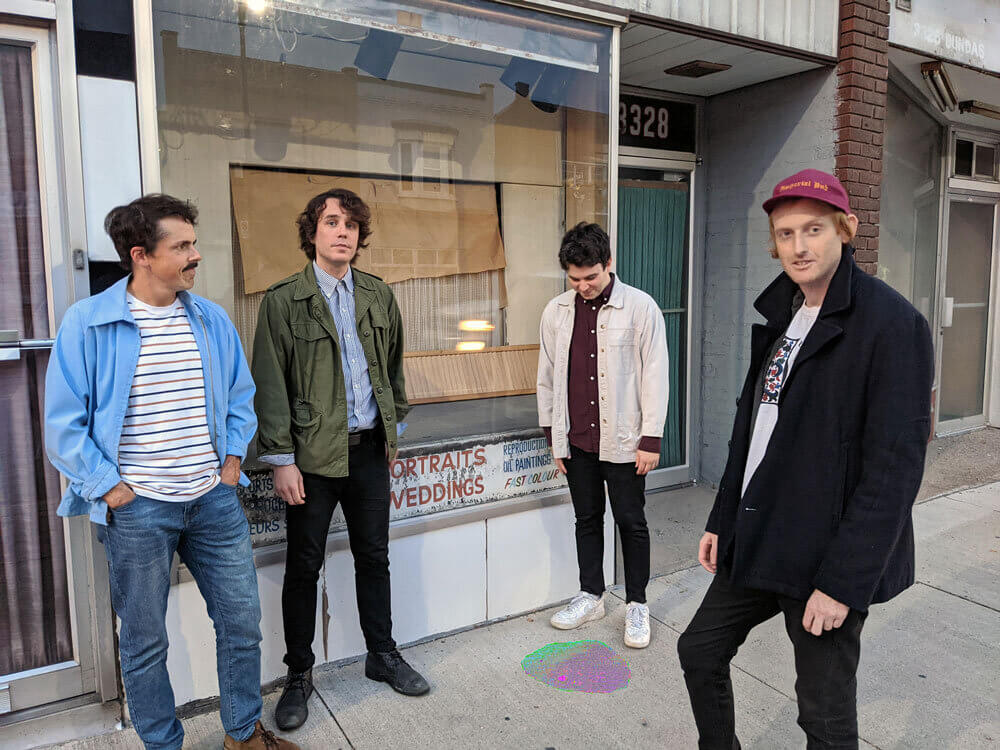 Kiwi Jr. photo by Warren Calbeck
Share on TwitterShare on PinterestShare on PocketShare on RedditShare on FacebookShare on Email

On “Omaha”, however, a narrator anchors himself to the present with a call to tattoo “2021” on his ass. While Cooler Returns was recorded in the time of COVID-19—replete with hand sanitizing stations and mask-up mandates— the line captures the album’s copyright specifics more than it does the zeitgeist.

“I haven’t listened to the record in a while, to be honest, so I don’t know how it’s framed against the news,” Gaudet says. “It’s not a particularly political record; it’s not looking to capture the unrest, uncertainty, and anxiety that people are feeling throughout this pandemic. When you get an almanac of notable events at the end of the year, I’m not sure how this record will stack up. But I do think that, musically and lyrically, it’s at an interesting place.”

Speaking with Northern Transmissions, Gaudet and guitarist Brian Murphy got into arena culture, cancelled gigs, bringing Berklee-trained piano playing into their indie-pop, and the other literally smoking sounds of their Cooler Returns.

This interview has been edited and condensed

Northern Transmissions: Were the writing sessions for Cooler Returns affected by the pandemic?

Jeremy Gaudet: I would say half of it was nearly there [before the pandemic] and then the extended break gave us— or gave me, in particular— an opportunity to stay at home and finish all the lyrics. We had to take some time off from rehearsals for a while. I think we were originally supposed to go in and record in March, but we ended up doing later in the summer. Toronto’s numbers in mid-summer, like July-August, were very low compared to what they had been in March, so we were able to get together safely to write and finish. Then we went in and recorded, but there were pretty strict measures. It wasn’t like the NBA bubble, or anything, but they had a temperature gun; there was hand sanitizer everywhere. You had to wear a mask unless you were in the room where we ate.

NT: The video for “Cooler Returns” [which green-screens a massive crowd and a couple of motocross daredevils into an imagined Kiwi Jr. arena performance], is both comic and tragic. For the moment, playing in such a large concert environment is still an abstract concept. What can you say about thevideo, and how it reflects the current state of live music?

J: Well, we were pretty limited. We knew we had to do something green-screened for the video, because we were only going to be able to gather with five people in the studio: us and the producer.

Brian Murphy: We actually did every take separate, and they spliced us together. That video was somewhat dictated by restrictions, similar to the way the “Waiting in Line” video was. We shot that whole thing outside.

NT: Brian, you also play bass in Alvvays. Were your last live shows the West Coast arena dates Alvvays had opened for the Strokes last March?

B: Yeah, but Kiwi had shows booked in New York for New Colossus festival and South by Southwest in March, too. It was right down to the 11 th hour, the night before Kiwi was supposed to go to New York, when the shit hit the fan.

J: We were supposed to fly out [to New York] really early. We were rehearsing the night before, and Brian was going to fly from the West Coast to meet us. While we were at rehearsal here in Toronto, we checked our phones and found out the NBA had just cancelled the season [due to COVID-19] and we thought, ‘wow, if the NBA isn’t playing, then our little gig tomorrow night probably isn’t going to go ahead.’ But some people went! We had friends that played that same festival.

NT: When it comes to Kiwi Jr.’s lyrics, you include a lot of landmarks in there as reference points—the CN Tower, Honest Ed’s, Dufferin Mall. Somewhat thinking about the NBA, here, but while you venerate all these local places by bringing them into your music, a recent tweet through the band account suggests you might not have as much respect for New Orleans’ Smoothie King Center.

J: That was me [laughs]. I was talking to a friend who had just moved to New Orleans. I was watching the Raptors play the New Orleans Pelicans, and I just couldn’t believe the sound of it. I don’t think there are Smoothie King’s around here [in Toronto]. I just thought it was funny; it sounds so post-modern. I was asking her if anyone in town has a nickname for it, but she said they only refer to it as the Smoothie King Center. Maybe it’s something you get used to.

B: In Boston, they play at the Jobs.com Arena.

B: Well, sorry…there’s a team somewhere on the Eastern Seaboard, and their arena is called the Jobs.com Arena. [Ed. We tried looking this up, but couldn’t verify. Certainly not an outlandish prospect, though.]

J: There’s the Quicken Loans Arena, too. In Florida there’s the Tropicana [Field].

NT: You’ve got the Rogers Centre in Toronto.

B: I definitely miss the days of independently named arenas— the Saddledome, or the SkyDome. Now it’s all just Rogers or Bell.

J: All of our stadiums in Canada are named after media giants and banks. It’s super boring. Maybe it’d be
cool to have the Smoothie arena?

NT: Getting back to the music, there’s also a lot of date specifics thrown into the lyrics. Can you get into the line about tattooing 2021 on your ass in “Omaha”? That’s a lot of pressure to put onto the year.

J: I thought it was funny. I liked the idea that we recorded it in 2020, but the record comes out in ‘21. This is a stretch, but you know when you hear a Kanye verse or something that shows up and you’re like ‘whoa, he referenced an event that happened last week! How did they get that recorded, mixed and mastered so fast?’ This was my attempt at that.

It’s a statement on the record, too. In the future, it’ll be seen as a 2021 record. All signs point to it being a pretty nuts time, right? You think about certain records coming out in the late 60s that are so tied to that time: protests, the changing of the guard. I don’t know….I just wanted to hit you over the head with that fact that this is very much of its time.

NT: How did you end up getting pianist Jay McCarroll [Hayden, Jason Collett] to play on several songs on the album? He’s a key part to the sound of Cooler Returns, even throwing a piano solo on “Dodger”.

J: There were at least four or five songs that I wanted to add some kind of sparkle to. We all talked about adding piano because we were listening to a lot of Rolling Stones, Jackson Browne, Warren Zevon— there’s so much piano on that stuff. We toyed with the idea of doing it ourselves; Mike and Brian can play, and I can make very basic moves with one hand. Ultimately, we decided we should get a pro. As soon as [Jay] sat down on the bench, it was like, ‘whoa! This is what a guy who went to Berklee sounds like’. The idea of us trying to do it ourselves was immediately laughable.

Something he said while we were doing it was that he didn’t want to come in and sound like another member of the band; He wanted it to sound like we’re a loud rock band, and he was playing harder to try and come above the noise.

B: A big part of that sound, too, was the sound of the piano. If you listen to those old Stones recordings or even [Bob Dylan’s] Highway 61 stuff, the piano is almost out of tune. It’s kind of busted-up. To a professional piano player, it probably sounds terrible, but that was the sound we were going for. The piano in the studio we recorded at [Ottawa’s Bova Labs] was kind of a smooth, “Let It Be” kind of piano. It didn’t have the right quality. I remembered this bar [in Toronto] that had this broken, busted-up honky tonk piano. That was the sound we wanted for the record. We purposefully brought [Jay] into [the bar] cold. As soon as he sat down and started tracking, [the songs were brought to] a whole new level.

J: I’m happy with the way it sounds. Jay played most of the piano on [the record], and then the rest of us took turns with playing organ. Any of that ‘60s-sounding organ is either me or Brian, I think.

NT: “Nashville Wedding” is a song where Brian’s only playing keyboards. Is that something you’ll be doing live as well? How do you want to approach keyboards going forward?

J: I can just jump in and say that’s because that’s such an old song. “Nashville Wedding” was a song that we had five years ago when it was just Brohan [Moore, drums] and I jamming it out. There was no reason for Brian to ever learn that song. When we decided we were going to record it [for Cooler Returns], there just weren’t really any other [guitar] parts for Brian to track. But he had a cool organ part that beefed up the chorus. I remember Brian doing it, and then we were all like ‘what’s that smell?’ We weren’t supposed to be recording, this was during mixing. The record was supposed to be delivered the next morning. We looked around and all this vintage gear was smoking, this old organ plugged into an amp. Stuff was starting to melt and fry! So we got the one take and shut everything off.

J: We kind of fled the scene, but I think we would have heard if anything was wrong.

Cooler Returns will be released in Canada on January 22 through Kiwi Club, and internationally via Sub
Pop. Pre-order here