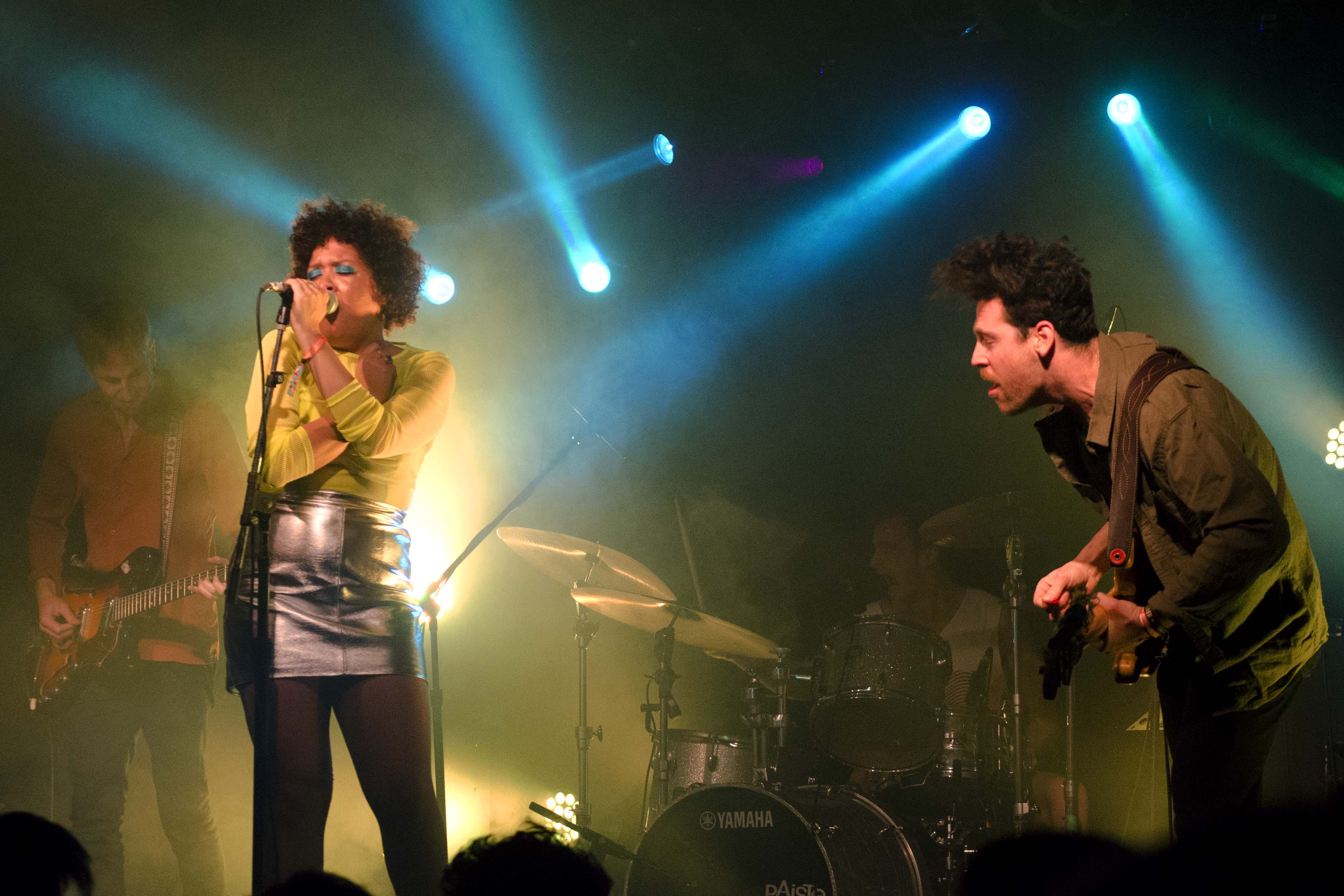 On a packed night of stellar artists, it might be hard to shine but dark shoegazers Vallens hit the mark and then some, making their hometown proud. With moody but driving tracks that took deep sonic dives while throttling along, they straddled the perfect balance of emotionally intelligent and rhythmically powerful to put out music that move the audience both on a physical and emotional level. Thanks to some of the best lighting at Lee’s Palace for the whole week the band’s killer live show, full of pedal antics and some penetrating thousand-yard stares by singer Robyn Phillips, was taken even higher visually.

Bringing an overpowering spooky glam rock to the stage, Casper Skulls were as haunting as they were fun to watch as they played a bouncy set of hard hitting, dark music. Guitars in hand they kicked up any remaining dust for the night and took the crowd along for the ride. Moving with unbridled intensity the band provided a moving build up for what was to come, and shook the crowd with their roaring bass and screeching guitars. Their alternating vocals between members and catchy harmonies easily caught the crowd’s attention for some chants. Closing on an epileptic level of light flicker and guitar mayhem, including Melanie throwing her entire body weight into their guitar for some extra bend as they ended on a devastating finale.

Making coming on stage a show of its own the members of Weaves grabbed their instruments while singer Jasmyn Burke stood off-side, pulling herself out and then back off-stage to rile up the crowd. Bringing tracks like “Shithole” and “Coo Coo” up with such a demented, visceral energy, Burke and co gave a top notch set full of eye-stares, constant gesticulating and even some extremely promising new material. Taking their playful harmonies sideways on “Two Oceans,” Burke handed the mic off to their bassist Zach Bines, while he hilariously chatted to the crowd about how the night was going, while Burke grinded on the banister off to the side. Taking the mic Burke even performed the trapeze act of walking the small rail that separated the beer shelves along the stage. Throwing the crowd into a frenzy on “One More” they went from excited to sheer lunacy as they threw themselves around to the music too frantic and charged to stay still to. Ending the show on “Motorcycle” they kicked up the crowd again before braving the 6-foot drops themselves to come down and play in the pit (save drums), each delivering a solo along some jokes to keep the antics going. Finally all getting back on stage, some even climbing the six feet themselves, they thrashed out the final chorus of the song to end the last big night of CMW on a show that involved everyone in the fun.

Beliefs, Eyeballs, Teenager at The Garrison

Beliefs started with a bang providing hard hitting drumming and fuzzed out prominent bass lines and scratchie wailing vocals which were split between Josh Korody and Jesse Crowe. The mixture of noise rock and shoe gaze sounds blended beautifully and the crowd were locked in the groove of the rhythm section, only breaking stride to drop a large bag of balloons from the ceiling to end the set.

Self proclaimed noise/dance band Eyeballs were the second band to take the stage for the evening, Eyeballs delivered a hard hitting set full of unexpected turns. Grooving synths and distorted bass have never seemingly gone hand in hand, but Eyeballs have hit on a bruising and loud sound that’s sweet enough to have you humming the tunes lo after they’ve departed the stage.

Teenanger delivered a set loaded with nods to snotty 1970’s punk acts, high on attitude and tangible energy. Not to say the band are over nostalgic, with current and relatable lyrics and sentiments littered throughout their songs, Teenanger are a band with sharp garage rock filled with hooks and substance.