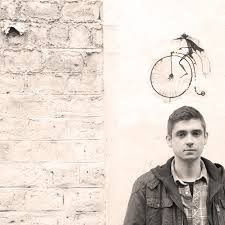 Architect is the debut album from singer/songwriter C Duncan. Today, he has shared the single “Garden.” Belle & Sebastian have invited Christopher to open at their Somerset House headliner shortly before Architect’s release, and The Blue Nile the same for a special performance at the Edinburgh Festival.

Architect showcases Christopher’s interest in electronic music and modern composition. He references The Knife and Arvo Pärt as willingly as Burt Bacharach and The Carpenters. Add to that shades of Talk Talk, Fleet Foxes, Grizzly Bear, The Ink Spots and the classical and choral compositions of Maurice Ravel and Gabriel Fauré, and a picture of the record collection that informs Christopher’s music starts to become clear.

Christopher wrote and recorded his album alone in his Glasgow flat on a bedroom studio setup, gradually adding each layer and each instrument one at a time, building up the breadth of the pieces. Though time-consuming, the process allowed for Christopher to lovingly assemble the intricacies and subtleties for this astonishingly intricate and subtle collection of music. As a composer, he is classically trained, graduating from the Royal Conservatoire of Scotland.

Christopher recently formed a live band to perform his pieces onstage. A full tour schedule, including festivals across the UK and Europe.
Tour dates