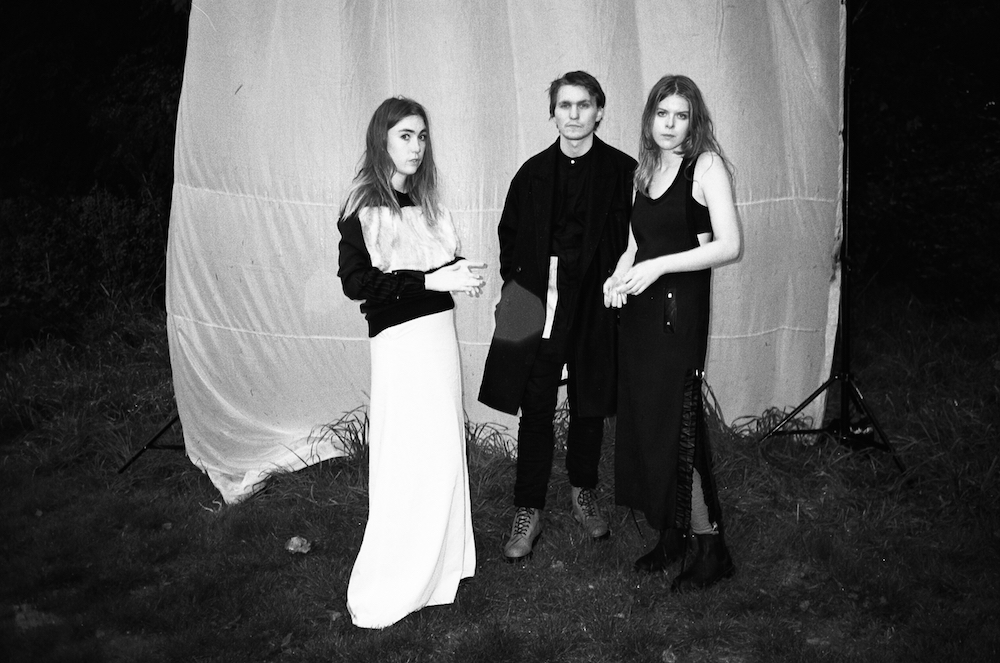 Written and recorded over the past year in Berlin, Reykjavik and Ireland, Black Lights is Icelandic trio Samaris’ follows the release of 2014’s Silkidrangar, and of a period of change and not a little emotional turmoil for all three band members. The way the new album came together reflects the changing personal circumstances of the group over the last year. All are now based in separate cities: Þórður Kári Steinþórsson (aka Doddi – programming) relocating to Berlin to take part in the city’s burgeoning techno scene, Áslaug Rún Magnúsdóttir (clarinet) to The Hague to study a specialized Sonology course and Jófríður Ákadóttir (voice) footloose, traveling to experience new places and the musical cultures within them.

Setting up a makeshift studio in a Berlin Airbnb apartment in Berlin to start work on the new record a year ago, the decision to record in English was quickly arrived at. “We started off laying down some gibberish while we were writing the melodies and then later fixed it into what made sense to us,” explains Jófríður. “We went away, all in separate directions and used our space in Toppstöðin, an old power plant in Reykjavík that’s now used for artist studios and offices, to continue to work on tracks. We were all confused in our love lives. Some had relationships that weren’t functioning, others were all over the place. That part hasn’t changed (laughs). I think the song ‘T3mpo’ is about all of us in that sense.”

The album was ultimately pieced together at Studio Hljóðriti in Hafnarfjörður last summer (“We were all high as the sky from 24-hour daylight… we work well at night time!”)Within months of forming in their teens in Reykjavik in 2011, Samaris had won both the Icelandic Músíktilraunir and Kraumur Award. The release of their two Icelandic EPs as the eponymous, ‘Samaris’ in summer 2013 served as their first introduction to the wider world. “We want people to experience something they haven’t experienced before,” they told a curious Dazed & Confused, and once ‘Silkidrangar’ – their debut LP proper – had dropped, the original aspiration of “just wearing funny costumes and thinking maybe we could get a gig in a bar in Reykjavik” became distant memory as Samaris took their hypnotising show round the world taking in Roskilde, Green Man, Sónar, Reeperbahn, Longitude, All Tomorrow’s Parties, New York’s Ace Hotel, Sydney Festival and of course, Iceland Airwaves.

Doddi says of the new single: “This one was written by me and Slugs (Áslaug) in Hljóðriti, the chords are a sample of the clarinet and the arpeggiator is a sample of Jófríður’s voice. I remember we were really quick coming up with it. The demo was called ‘Nofríður’ because she wasn’t there and one of the sounds in it is me singing in a vocoder. Me and Jófríður went to Ireland and recorded a demo of the vocals the final vocal take recorded in London. The original was 15 minutes long, we could listen to the loop for hours so the arrangement was quite tricky, we had to leave a bunch of sounds and melodies out.”

Samaris
Black Lights
Out June 10th, 2016 via One Little Indian