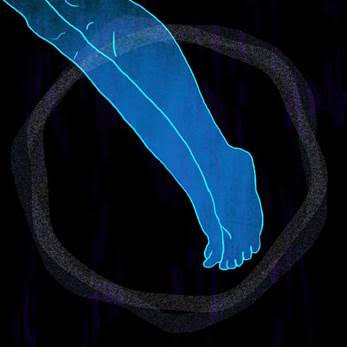 Bernice, has shared the video for “St Lucia” – the band’s debut track for Arts & Crafts. Bernice vocalist/songwriter Robin Dann on the director: Sonia Beckwith-Cole, who directed the “St Lucia” video, was the clear choice – “Her animation felt completely right to me, and I knew she would make something so beautiful for the song’s world.”

“When I first heard the song I imagined pinks and blues, a lot of textures and water, water, water,” director/animator Sonia Beckwith-cole says of her inspiration for the video. “The song talks about how as a woman you are connected to a lineage of women that are a part of you, and contribute to who you are, while somehow still being distant. The verses bring up these complicated feelings and the chorus brings us escape from these worries to be present in a moment of joy. The woman in my story starts out in a confused wandering state surrounded by dark, obscured imagery. When she finally dives off the edge of a waterfall the imagery becomes bright, colourful and full of movement and she finds solace with friends in the water.”

“St Lucia”, the bouncy, maximalist R&B track produced by Grammy Award-winner Shawn Everett, is inspired by Robin’s great Auntie Irene and is about maternal ancestry and the traits we know or don’t know we embody from those who came before us.

Born to a musical family, the daughter of a symphony harpist and the former Toronto Symphony Orchestra’s principal violist, and a graduate of Goldsmiths’ MA in Music, Dann’s background, formal training, and experimental sensibilities developed into sparse arrangements and pop-minded songwriting, often following curious and unexpected paths.