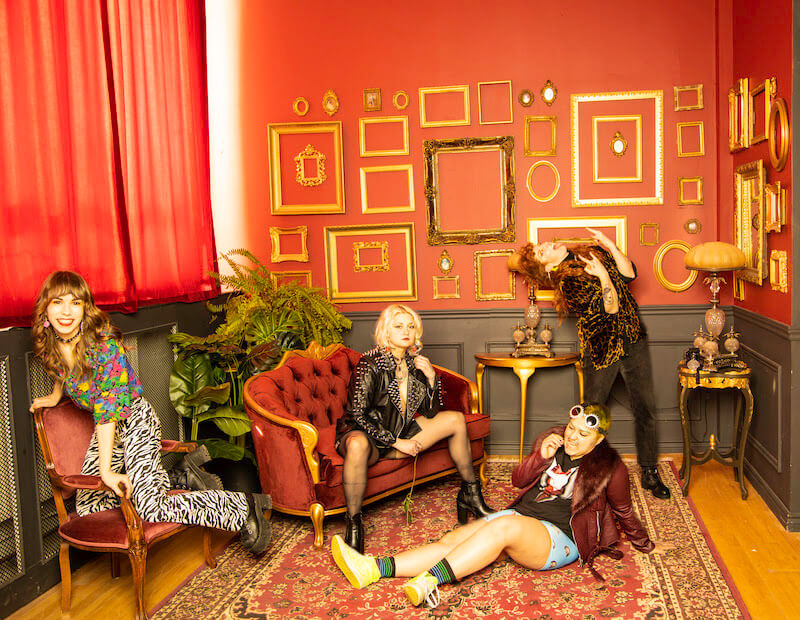 Bad Waitress will release their debut full-length No Taste on September 3rd via Royal Mountain. Ahead of the album’s arrival, the Toronto band have shared a video for album track “Strawberry Milkshake”.

“”Strawberry Milkshake” is saccharine sweet, milky pink terror. On the surface it’s sexy and enticing- but there’s a poisonous sludge bubbling just beneath. It paints the picture of an all-American beauty pageant with buckets of blood as the cherry on top.”

Memebers Katelyn Molgard, Nicole Cain, Kali-Ann Butala, and Moon finish each other’s sentences. Their conversations flow like free jazz. When asked to describe Bad Waitress’ sound, they agree on one word: conviction. “We play with conviction. There’s nothing apologetic about it,” Kateyln says. “Even with our bizarre song structures, we don’t hide anything in our music. It’s just very…I don’t like the word raw, it’s overused, but…raw.” The band fidget between genres, instead honing a distinct energy. “It’s energetic. It’s electric,” Moon adds. “It’s whatever word that we can think of later that’s better than raw.” Nicole suggests, “Honest?” Katelyn jumps in, “Rawnest.”

Bad Waitress began when Kali (Vocals & Guitar) and Moon (Drums) started jamming as The Nude Dogs back in 2014. Katelyn (Vocals & Guitar) joined two years later, and by 2018, the trio would release their Party Bangers EP under the name Bad Waitress. “It started off small,” Moon reflects. “The main premise of the band was that we just wanted to get together and play music with people who weren’t old men.” When Nicole (Bass) joined in late 2018, things really clicked into place. “We didn’t realize what was missing until it happened. Then it was like, this is like what our fucking band was missing this whole time, this extra little piece that made it all make sense.”