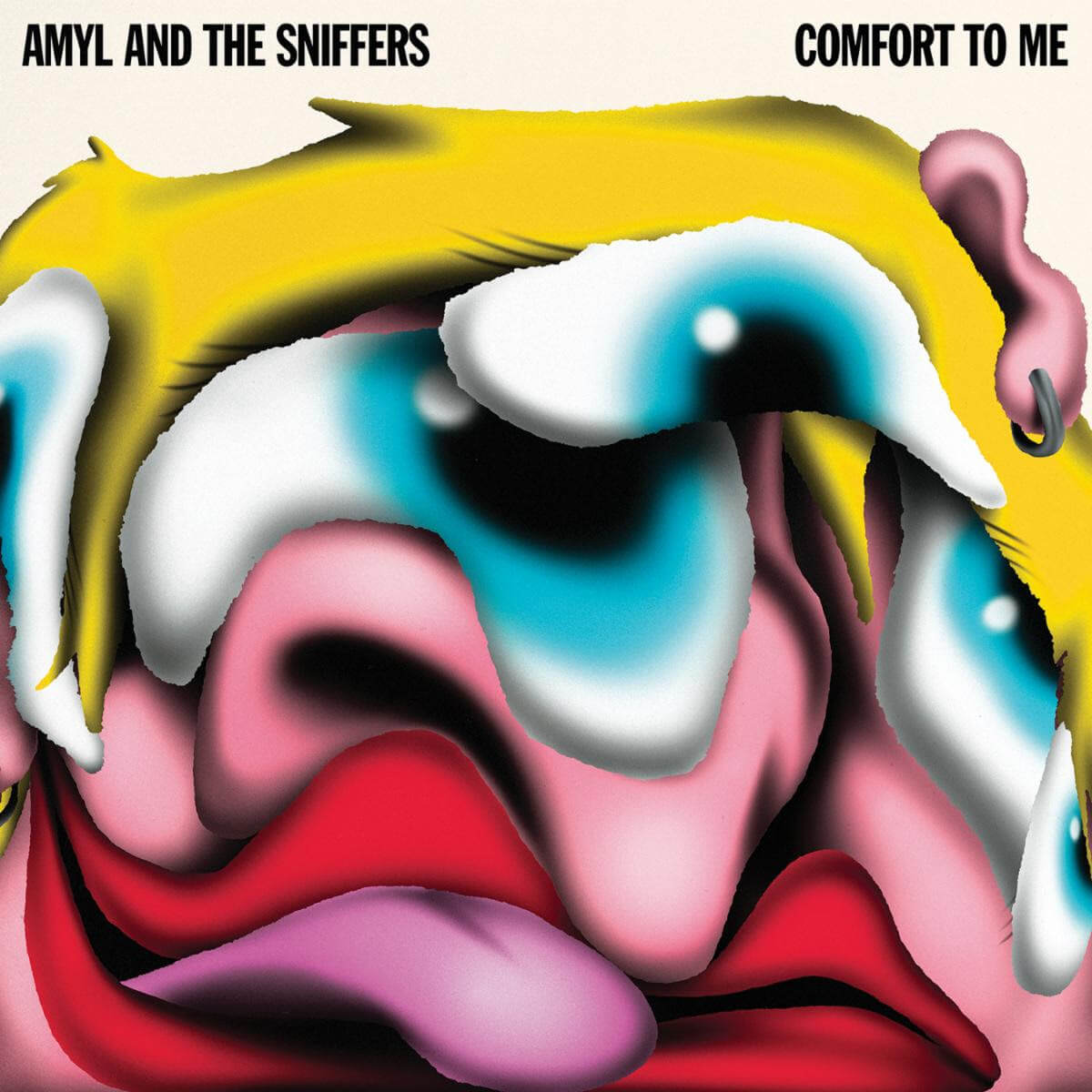 There’s a duality to Amyl & The Sniffers new record ‘Comfort To Me’, which is a direct and indirect result of the Covid-19 pandemic and lockdowns felt across the globe. For a band like the Melbourne collective, having them cooped up together in a 3 bedroom apartment (there’s 4 in the band – they took it in turns sleeping in the shed…) is like keeping a pit-bull in a cage 24/7.

To make a tenuous link to the album closer on 2019’s self-titled debut LP ‘Some Mutts (Can’t Be Muzzled)’, it’s evident that their sophomore record is fuelled by a pent-up rage attributed to being trapped in each other’s company for weeks on end. It’s not like the Aussie collective aren’t known for their raucousness, given their riotous live shows and their previous punk/hard-rock tinged material; it’s just ramped-up this time around. While they’re as brash and noisy as ever, there’s also a vulnerable side to the band that’s represented in their new offering. This is merged with a broader view on socio-political events and other factors like gender equality. These themes came to light as lead sniffer, Amy Taylor was searching for inspiration for album two, as she wrestled with an imposed life-pause, the front-person reflected on her own life and the world around her.

For the most part ‘Comfort To Me’ is buoyed by ‘The Sniffers own-brand of Aussie punk rock, albeit there are some diversions into post-punk, surf, pub and hard-rock. Opening track ‘Guided by Angels’ feels like it’s being held on a tight leash as Taylor snarls “I’ve got plenty of energy/it’s my currency”, which is evident as the likes of ‘Freaks to the Front’, ‘Don’t Need a Cunt (Like You To Love Me)’ and ‘Laughing’ (to name a few) accelerate with all the energy the vocalist preaches about in the album’s first few minutes. If this is Taylor’s currency, she and the other Sniffers have clearly won the lottery, as they splash the metaphorical cash like they’re Scrooge McDuck leaping into a bottomless pit of shiny gold coins. The relentlessness is ratcheted up a notch when the punkish venom is combined with Taylor’s observational lyricism. ‘Capital’ with its intense, almost metal chug makes reference to the all to frequent bushfires in Australia and how Taylor’s own body is exploited and leered at by lecherous men. A bounciness is added to ‘Don’t Fence Me In’, which is anchored by a garage-rock roughness. Again, the band’s mouthpiece is lashing out at being oppressed “you’ll have to prove your intelligence before wrapping a fence around me” comes delivered with her customary cutting Bogan snarl. ‘Choice’ jolts with spasmodic blasts of feral punk noise before leaping into a hardcore-esque stomp that has Taylor barking “I can make my own choices/I ignore all the voices”.

When the band opt to explore a more tender side, the rampant nature of ‘Comfort To Me’ doesn’t let up (well, there is one track – I’ll get to that in a bit); there’s ‘Hertz’ a loved up romp about escapism, propelled by boinging bass and thumping drums. ‘No More Tears’ is where Taylor exposes her vulnerable side via a less than abrasive vocal delivery “I wish I could love me for all of my flaws/like I love you for all of yours” as the song sashays with more of a rock ‘n’ roll wiggle. A darkness descends via the surf-rock flecked ‘Knifey’; there’s a starkness both sonically and lyrically as Taylor depicts the everyday danger of being a woman on her own when the sun goes down. With the pace slowed down but the intensity maintained, our protagonist sneers “all I ever wanted was to walk by the park/all I ever wanted was to walk by the river/see the stars/please stop fucking with us” as she punctuates the song’s core with the bleak “out comes a knife/out comes my knifey/this is how I get home nicely”.

‘Comfort To Me’, comfort to you; Amyl & The Sniffers have struck a cathartic chord with their sophomore album, one to be universally embraced.

Pre-order Comfort to Me by Amyl & The Sniffers HERE