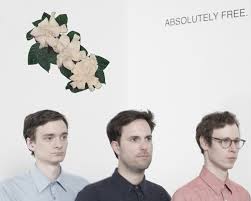 Absolutely Free have debuted their LeBlanc + Cudmore directed music video for “Vision’s”. The video is a heavily psychedelic exploration of a fictional collaboration between the band and a fashion designer. In the band’s words: “”Vision’s” was written as a song about losing focus. The video suggests a distorted environment/context that plays on the musical aesthetic of the song and reinforces Absolutely Free’s ethos.”

Absolutely Free debuted its self-titled release with holograms of the band members’ likenesses performing the album’s eight movements at Fucked Up‘s Long Winter music & arts series. At TIFF 2014, Absolutely Free performed original score music for a selection of Norman McLaren films and animations, in direct partnership with the National Film Board of Canada, including a rousing arrangement of “Vision’s” set to the seminal filmmaker’s Synchromy. The trio recently played shows with actress (The Strain, Alias, The Twilight Saga).