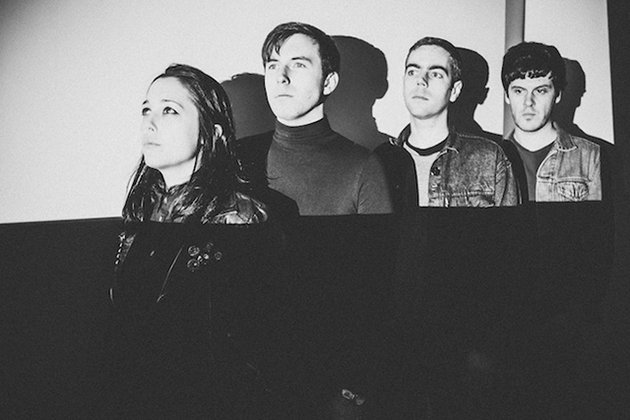 Northern Transmissions caught up with singer/guitarist Cathal Cully from ‘Girls Names’. We talked about the band’s imfamous first gig with Waaves, and the limitless possibilities of the Internet.

NT: Is it true the band formed for the sole purpose of opening for ‘Waaves’ and that none of you guys had played live before?

CC: Yes it’s true. I personally had never played live before and Neil had never played live drums before.My friend Mark booked the gig, he didn’t know who to book for support, I was drunk and said I’d sortsomething for it. It was really naive, I could never do that now but I didn’t think it was that big deal.Just a real DIY can-do attitude, no game plan, we’d just play a show and see what happened. That was 4 years ago.

NT: Girls Names are signed with Slumberland Records, tell me about how the band (from Belfast) ended up on a label from Oakland, California?

CC: I say this all the time but the internet knows no geographical boundaries. When Tough Love put our second EP/mini album Slumberland were in touch with them about it and then it started from there. We only met Mike, Slumberland records boss, for the first time last summer after 2 years of constant email correspondence.

NT: Your new album is called ‘The New Life’, the first one was called ‘Dead to me’. Have you changed your outlook on things a bit?

CC: Outlooks change all the time, that’s one of the greatest things about art and music. It’s funny that a lot of people are saying this album is a lot darker and more downbeat but it has the more positive title. It’s fair to say I’ve changed my outlook since making ‘The New Life’.

NT: ‘The New Life’ is definitely a bit of a musical departure from the last album, did you feel you wanted to create something really different from the last release?

CC: Production wise – yes, totally. We wanted to create one body of work from start to finish as opposed to a collection of songs. It’s no where near as immediate as Dead To Me and that suits me fine. You need to give it a few listens for everything to reveal itself. Some of my favourite music really makes you squirm and can be really hard to listen to at times. I wanted to try to go somewhere half way there.

NT: Is it difficult self-producing your records?

CC: It sure is difficult self financing them but if I had the choice I’d be in a studio everyday just trying to make sounds. The process of production for this album was made so much easier as we had a friend Ben McAuley, from Start Together Studios in Belfast engineering and mixing it. All I had to give him was an idea description and he could make it happen!

NT: Tell me a bit about playing the Primavera festival, I think it was one of the bigger shows you’ve done so far.

CC: Yeah it was, it was really cool. It was just a week before recording the album and we were touring and testing all these new songs that would eventually make up ‘The New Life’. The set only had one song from ‘Dead To Me’ but we had the confidence and conviction to pull it off and surprised a lot of people. We actually just played Barcelona again there the other day with The Soft Moon. It was a great night, the spanish are great people.

NT: Which Five albums from your collection continue to inspire you?