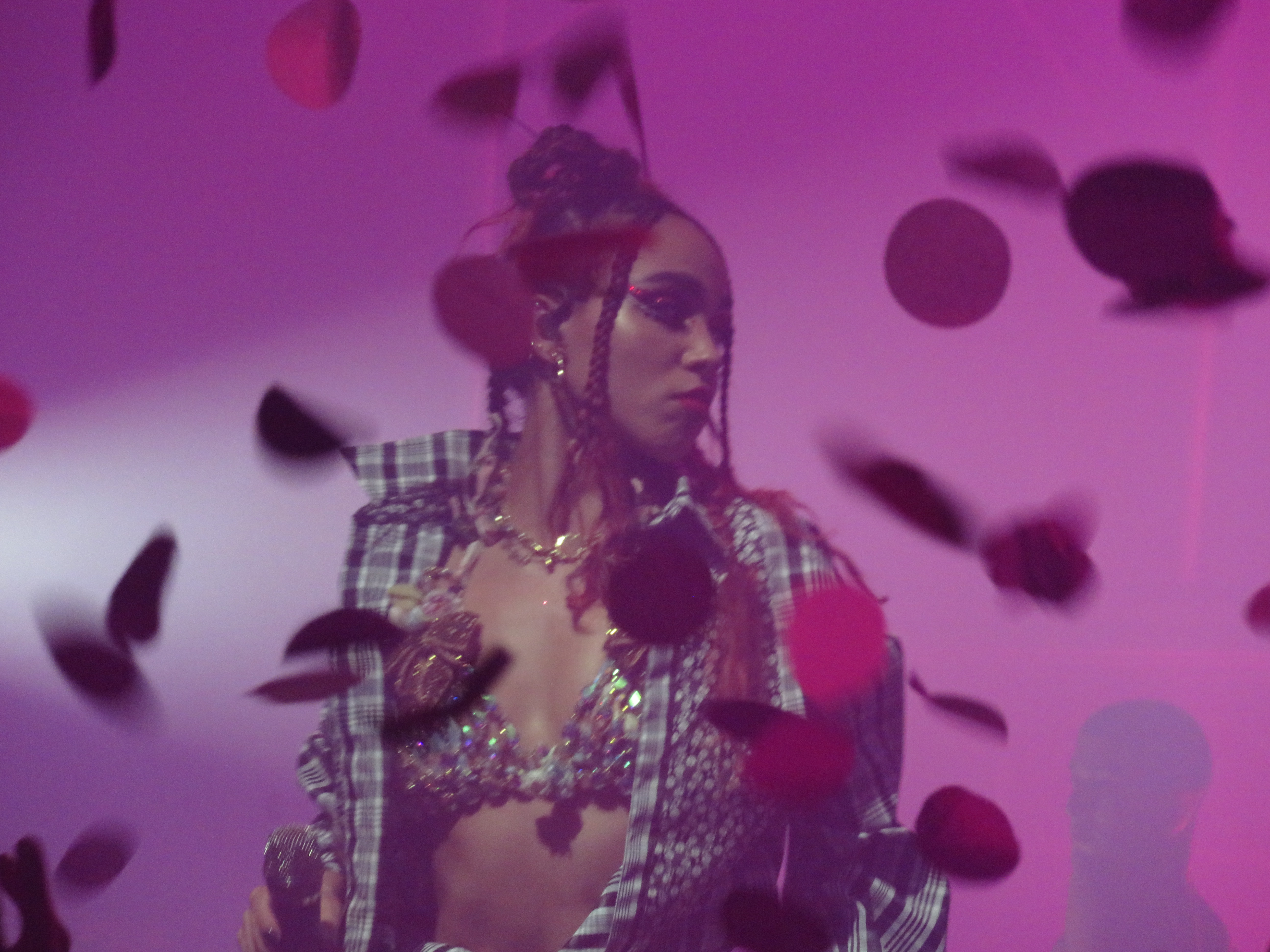 FKA Twigs Dazzles Fans In Vancouver. Photo by Steve Barmash
Share on TwitterShare on PinterestShare on PocketShare on RedditShare on FacebookShare on Email

For fans of U.K. based queen that is FKA Twigs this weekend was something special. If you were lucky enough to catch one of two packed shows at the Vogue, you were treated to spine-tingling vocals, theatrics, incredible movement, costume changes, masterful choreography and lighting.

Twigs performed an hour and a half of pitch-perfect renditions of songs spanning her musical career. Along with it came a multitude of costume changes, many of which played into the theme of her upcoming LP Magdalene. The track “Mary Magdalene” itself had Twigs playing a fierce queen, wearing a cape and outfit that included a deep blue sparkled crown decorated with a golden pattern, and multi-colored ribbons and flowers attached to various parts of her costume.

The production value was absolutely excellent, and the show itself was carefully curated, moving through different phases starting with Twigs performing solo and working in a tap dancing routine in front of a red curtain. In a way, the evening felt more like an immersive performance art piece than a concert.

With lights flashing at a drunken rate to “Hide” from 2014’s LP1, Twigs quickly disappeared behind the curtain. Moving into “Water Me” from 2013’s EP2, the curtain was drawn back revealing a stage filled with smoke and lights, with Twigs in a giant white feathered hat. Deep hues of purple, reds, and bright whites dominated the visual spectrum. The sound was crisp and clear, capturing every word and breath Twigs had to offer, with the audience silently absorbing every note and movement.

There were no video screens required here, considering the talent of FKA Twigs along with 4 dancers and the choreography put together by Twigs herself, the spectacle was right on stage. Their performance was equally jaw-dropping with incredible lifts and jumps, locked in-sync with Twigs for many of her dance sequences.

Halfway through the set, a second curtain dropped, revealing two multi-instrumentalists playing keyboards, e-drums, and guitars along with a cellist standing on metal scaffolding, creating the atmospheric sound we had been hearing all along. Later on, Twigs came out from the dark and performed a sword routine in the style of Wushu, a technique she has trained in and is now incorporating into her shows as a part of the performance. That’s right, you heard correctly. A choreographed sword routine. If that weren’t enough, another highlight was an intricate pole-dancing piece during “Lights On”. The artist trained for 6 months to perform the sequence in the video for the new single “Cellophane” from Magdalene, and those skills were on full display tonight. An amazing feat of athleticism, Twigs lifted up over 10 feet in the air while spinning and suspending at different angles and positions along with her dancers spinning below. This reviewer is not as familiar with the proper terminology in terms of pole dancing, but needless to say it was a unique experience to witness.

“Holy Terrain”, also from the upcoming Magdelene album, was an absolute assault on the senses with a perfectly executed dance routine much like the video, directed and choreographed by Twigs herself. Other passionate performances included “Home With You”, “Pendulum”, as well as “Video Girl” and a mesmerising “Two Weeks” from LP1, the latter commanding fevered cheers from the enamored audience.

Before closing the show with a haunting rendition of “Cellophane” by herself in front of the red curtain, just as the show started, an audience member yelled out “I Love You!”. She replied that she loved them too, and asked the crowd if they had ever been heartbroken. It was ultimately in this exchange between the artist and the audience, that the performance that preceded really had explored the fragility of the human heart, and the ephemerality of performance art culminated in an indescribable evening full of surprise and wonder.