Young Galaxy ‘Ultramarine’ out on April 23 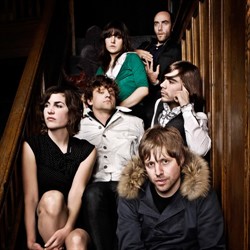 Ultramarine is more direct than previous Young Galaxy records have been, with songs of azure longing, Young Galaxy haven’t lost their other aspect: a willfulness, a purposeful independence, and a sense of darkness, unilluminated. As lighthearted as Ultramarine can be – as much as you can dance to it – there is also something elemental, something underneath.

2.Fall For You (Ghosting Season Remix)