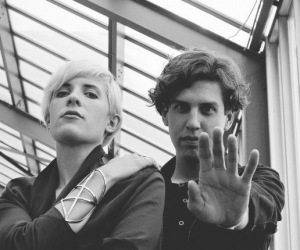 YACHT is donating 100% of the sales of their new song, “Party at the NSA” to fight against the unwarranted surveillance and wiretapping of U.S. citizens by the NSA. Download the song directly from http://partyatthensa.com for a pay-what-you-want donation and YACHT will give 100% of the money to the Electronic Frontier Foundation, a nonprofit leading the fight against the NSA’s illegal mass surveillance program.

“Party at the NSA,” a joyous send-up of the security agency, is a team effort. Comedian Marc Maron, a strong advocate of digital rights who has extensively advocated against Patent Trolls, plays the guitar solo on the song. YACHT and Maron share a strong belief that the Internet should be a free space for ideas. “We live much of our lives online; we should be outraged by the extent of the NSA’s domestic spying programs,” the band says. “Instead, we are sinking into a dangerous indifference. Insidious forces are at work. Help us reverse the entropy.”

YACHT believes in a free and open Internet, in transparency, and in collaboration. Please spread the word about “Party at the NSA;” together, we can help the Electronic Frontier Foundation work to protect us from the encroaching surveillance state.