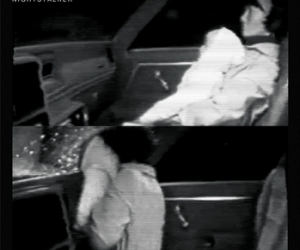 Androgynous Mind is a new project from former Women guitarist-vocalist Patrick Flegel, and whilst only five songs are on the Nightstalker EP, just hearing him with a guitar should be enough to get fans of his former work excited. The EP is set for release on 9th December via Faux Discx (Cold Pumas, Sauna Youth, Vision Fortune, Virginia Wing) on 7″ and digital download. Grab a free download of ‘Knock On My Door’ above.

Flegel is joined by Morgan Cook, who plays things straight and primal against his dissonance and squall, that is when she isn’t wailing along with him, like on the opening pair of tantrums that sound like some lost Harry Pussy recording session. It’s over in a blink before segueing into “Knock at My Door,” a spectrally understated pop gem worth playing bleary-eyed at four in the morning. “Knock” revels in Flegel’s distinctive guitar presence, working shapely lattices of notes into descending sheets of melody in a manner both lulling and forceful, but you remember that from Public Strain, right?