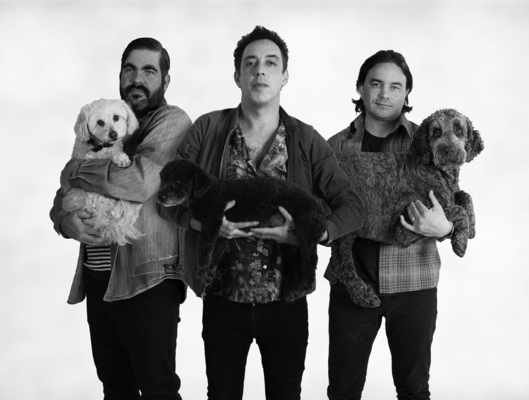 After the departure of multi-instrumentalist Dante DeCaro, Wolf Parade returned to their original three-piece format, forcing frontmen Dan Boeckner and Spencer Krug to take on more responsibilities than they have since the band’s early days. This back-to-basics approach has resulted in Wolf Parade’s best album since 2005. Led by standout tracks “Forest Green”, “Against the Day”, and “Under Glass”, Wolf Parade sounds fully rejuvenated on Thin Mind with an urgency to their music that hasn’t been heard since they reunited in 2016. Recorded during a crippling snow storm at an old barn studio on Vancouver Island, Boeckner, Krug, and Arlen Thompson emerged with an album about making sense of the present while reckoning with visions of the future.

We reached Dan Boeckner in Nanaimo, BC, where Wolf Parade has been locked out of their rehearsal space for three days because of another snow storm. “A blizzard hit Nanaimo, just like it did last year and the year before,” says Boeckner. “But people aren’t ready to accept climate change yet! It literally paralyzed the island. Maybe it’s time for these municipalities to invest in snow removal equipment because this problem isn’t going away.” Wolf Parade’s North America tour kicks off on January 27th at Portland’s Crystal Ballroom, and 2020 promises to be a busy year for the band with tour dates already scheduled through March.

Northern Transmissions: Spencer has described the album title, Thin Mind, as the way that being around too much technology has made our focus thin. Not to point any fingers, but this morning the first thing I saw on Twitter was an article you shared titled, “Croatia has enchanting words for genitalia. Why doesn’t the UK?”. Is this the best example of Thin Mind?

Dan Boeckner: Haha that is the perfect example of Thin Mind! I am a victim of the Thin Mind mindset. Yesterday we were snowed in and I was trying to make the most of it by rehearsing at home and working on some stuff for Devojka from Operators, but of course my attention left to my newsfeed, which was just a radioactive toxic dump of the vilest media. It was the worst day for media it seems in a really long time. So, sometime around three in the morning, I was looking at The Guardian and this article pops up with this dude who seems to write specifically British gross shit. I’m not sure why or how the Guardian published this article. That’s a good example of Thin Mind, it’s the piece that broke me. It wasn’t the admission that the same PR firm is working for three different Democratic candidates, it was this deeply weird British man.

NT: What are your cures for getting away from Thin Mind?

NT: Thin Mind is your first album as a three-piece since Apologies to the Queen Mary. How was Dante’s presence missed in the recording of the album?

DB: We had to go back to the original formula of Spencer and I plotting out songs where we’re trading moments of taking up sonic space, if that makes any sense. Spencer’s responsible for most of the bass, and then the leads and the melodic range parts need to be passed back and forth, and that’s a muscle that we haven’t exercised in a while. But it was very rewarding; we ended up making songwriting decisions really quickly because there was no one else to pick up the slack.

NT: When you transfer this material to the live shows are you thinking of going out with a touring guitarist?

DB: We were originally going to get a touring guitar player, but the more we started writing and talking about it we were like, “no, we should just do this as a power trio.”

NT: The three-piece format seems to really suit you. I’ve seen Wolf Parade play several times over the years, but I was really blown away watching you play with Operators at the Théâtre Fairmount in October.

DB: That was one of my favourite shows that band ever did! I thought by the time we got to Montreal we were battle hardened from touring the Ukraine and Russia, so we were really just ready to go.

NT: How do you think the older songs are going to translate with just the three of you playing together? Dante really filled up a lot of space on stage.

DB: We played a show in Seattle in front of the Space Needle for KEXP last year as a three- piece, and we tried a handful of new songs but mostly old stuff. We spent a lot of time last year working up the old stuff into a three-piece arrangement, so we’re feeling good about it. There’s just less room for error, you know? Like there’s nothing really to hide behind now, so we have to be on.

NT: I was looking at the album art for the record which features some kind of treehouse militia. The first version I saw had a discarded Tim Horton’s sign in the front, and now looking at the album cover it seems like the words on the sign have been replaced by an alien symbol. What led to the change? Did you get into a fight with Tim Hortons?

DB: The Canadian version oddly will have the Tim Horton’s sign, and the American version will have that symbol thing. Sub Pop was worried that Tim Horton’s would sue them. My counter argument to that was if you go online and search “bootleg Tim Hortons” there are a minimum of five chains mostly Taiwanese, Chinese, and Indian, that are straight up bootleg Tim Horton’s. There’s a Tim Hotten’s, a Kim Horton’s, and some others too. Royal Mountain is still going with the original Tim Horton’s post-apocalypse thing. For Sub Pop I spoke to Simon Roy who did the album cover and basically said, “you need to come up with an alien language that is as close to Tim Horton’s as possible without actually being legally actionable,” and he did a great job!

NT: What kind of art direction did you give for the album art? It’s pretty unique.

DB: The art is a collaboration between Simon Roy and our Australian friend Hayley (@hayleyglyphs) who does a lot of sci-fi influenced art, like very graphic Star Wars fan fiction. We basically gave them the template of Jodorowsky’s unfinished 1970’s Dune film, where he got different artists like H.R. Giger and Moebius to render different factions of the story. We gave them a story that Arlen and I wrote and told them to render each individual faction. Simon’s job was to render the post-eco-apocalypse Vancouver Island protagonists, the good guys who are kind of like eco-terrorist cyber-hippies living in an informal anarchist society, and Hayley was responsible for the ruling class, the antagonists, who are these libertarians neo-liberal capitalists that live in these giant organic condo structures. They really knocked it out of the park.

NT: How did recording in the old stone barn studio setting of Risqué Disque impact the album?

DB: It’s really remote and under serviced for comfort, but I think that just made us focus more. The snowstorm last year locked us out of the studio for almost a week and I did most of the lyric writing during that time. I was staying in a basement suite in Nanaimo right by the harbour buried in snow, and that’s where I wrote “Forest Green”. I think I knocked it out in one night. Being snowed out of the studio was a bummer, but definitely helped the creative process.

NT: I was actually wondering what inspired some of those lyrics on “Forest Green”. I really like the lines, “we got the sea and the sand/we got colonial days on stolen land” and “farewell to forest green, no more oasis in the Anthropocene.”

DB: “Forest Green” is about Vancouver Island. I write about this island where I grew up a lot, it’s on almost every record I’ve made in the last twelve years. I’m still sort of processing how weird this place is and how it affected my artistic development and my own development as a person. The song ends with Vancouver Island being turned into a sheet of glass by a nuclear strike.

NT: Wolf Parade has now released two albums and an EP since the end of the hiatus. Looking back now, do you feel that the hiatus was necessary in rejuvenating the band?

DB: Yeah, I think it was definitely necessary. I think Handsome Furs’ Sound Kapital came out right after the hiatus was announced, and looking back I feel that album was sort of the start of a completely different trajectory for my career. Spending time with Divine Fits and starting Operators was absolutely necessary for me to just be a better musician and have something new to say. And then post-reformation, I feel like Thin Mind is just another new phase for the band. The EP and Cry Cry Cry were sort of a continuation of what we were doing on Expo 86, but I feel that there’s a clean break in our trajectory after Dante left, and I’m really excited about going out and touring this album.

NT: On a song like “Against The Days” I really hear the influence of Operators. Do you think your other projects have bled into Wolf Parade?

DB: Definitely. I’ve become a lot more comfortable with synths from working with Devojka in Operators. I’ve learned to make them sound like I’ve always wanted them to, and that knowledge definitely bled into this session.

NT: Another highlight is album opener “Under Glass”. What was your mindset writing that song when you lament “nobody knows what they want anymore”?

DB: I started writing that song when Meghan McCain was in the news all the time, and I was like, “I’m fucking trapped here with this person.” I didn’t ask for her to be in my mental state, but I couldn’t escape her. It was driving me crazy, like my brain was being controlled. From the moment I woke up I would hear about this fucking person who is essentially like a useless vector. Why do we have to know what she thinks? She actually makes an appearance in the song, I wrote the line “sometimes I wonder why we even know the names of the useless sons and daughters of the criminal class” for her. I couldn’t get her off my mind, so Meghan McCain became the catalyst for “Under Glass”.

NT: I grew up in Montreal and I’ve been following Wolf Parade most of my life, and I have to say this album really does sound like some of your best work.

DB: Thank you, writing Thin Mind felt like writing the first record in a lot of ways. There wasn’t the same amount of trial and error because we all sort of know what we’re doing a little better, but it really did feel like those early sessions for the first EP of Spencer, Arlen, and I in a room just banging stuff.