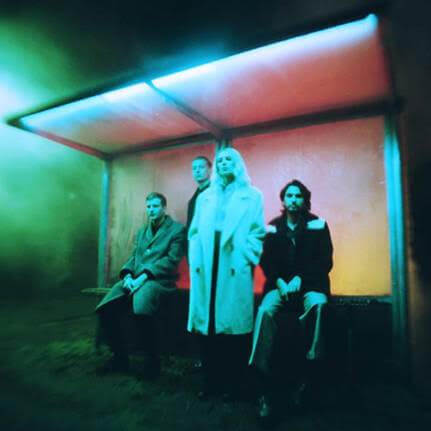 Following up 2018’s Mercury Prize winning ‘Visions of a Life’ was always going to be a mean feat for Wolf Alice. After touring the LP endlessly, the London four piece chose to decamp to Somerset to recalibrate and to commence with what would become their third record ‘Blue Weekend’. No idea was a bad idea, everything was considered in the early sessions; this was partly down to the fact they had next to nothing in their back pocket from being on the road constantly.

Narratively, lead singer/guitarist Ellie Rowsell looked inward for threads to pull from and inadvertently conjured up a body of work that’s less of a diary entry and more about the listener’s experience and interpretation. As Rowsell puts it “this album is for other people. It might make people feel listened to if they are going through something.” Notionally ‘Blue Weekend’ is anchored firmly in relatable human traits and challenges, from love and loss, to strength and vulnerability, Wolf Alice have burrowed deep into the way people tick and offered back to their fans a mechanism to celebrate life and a coping strategy for it too.

For over a decade now the quartet have immersed themselves in a broad sonic palette, from grunge-esque barrages to expansive walls of sound that glisten with an ethereal glow. Normally with every moment of sweetness, there’s a liberal dollop of something sour; for every barred, visceral vignette, there’s a tender softness. While Wolf Alice’s fiery side is displayed in the strutting ‘Smile’ and ‘Play The Greatest Hits’ punky rage, which presents itself like a natural successor to ‘Visions of a Life’s ‘Yuk Foo’. However, the majority of the group’s third outing leans heavily on the more celestial angle found within their cannon. These tracks are usually a melange of quiet/loud dynamic shifts, as a song will commence minimally before unfurling into a widescreen glow that borders on the orchestral. Despite there being a duo of tracks that have Wolf Alice baring their teeth, ‘Blue Weekend’ lacks the anger from their previous records. Equally, their choice of lead single ‘The Last Man on Earth’ is a blessing and a curse, in that it’s the best song among the 11 tracks and one that most Wolf Alice devotees will have already fully embraced. Akin to a film trailer displaying a movie’s best bits prior to hitting cinemas, it feels like the foursome have showed their hand too soon and maybe should have left its ‘wow’ moment for when the album is eventually released. It could well be that Wolf Alice have become victims of their own success having released a range of stunning EPs and two immaculate studio albums, their own creative bar is stupidly high. This isn’t too say ‘Blue Weekend’ isn’t a good album, it very much is but there’s an under lying notion that it’s missing one other great song in the same ilk as ‘The Last on Earth’. The song is a beautiful piano ballad that slowly crescendos through a Beatles-y whoosh of psychedelic colour before a lush string arrangement brings the whole thing to a grandiose yet intimate finale. It’s arguably one of the best songs Wolf Alice have created to date. Something else undeniably positive about the record is Rowsell and guitarist Joff Oddie making subtle nods back to the folk roots of their early days as a duo on ‘Safe From Heartbreak’ and ‘No Hard Feelings’, while the giddy ‘pinch-me-am-I-dreaming?’ ‘Delicious Things’, has Rowsell detailing a time spent in Los Angeles as she gushes “I feel like Marilyn Monroe”. Lyrically the record is strong, as ‘Blue Weekend’ see-saws through a range of varied emotions; like on ‘Lipstick on the Glass’ as the band’s vocalist deftly states “don’t call me mad/there’s a difference/I’m angry” or through the smoky piano-via-sci-fi evangelical soup of ‘Feeling Myself’. This is where Rowsell delivers a damning side eye to a man who’s been putting himself about way too much “he’s had so many lovers/it doesn’t mean he’s been pleasing anyone.” Then on the eventual cinematic hue of ‘Lipstick on the Glass’ our protagonist hits you with a lyric anchored in dichotomy “there’s no pleasure in existing/so go ahead and kiss me” like two doomed lovers sharing an embrace while the world is ending.

Rightfully so ‘Blue Weekend’ will crystallise Wolf Alice’s status as one of the most important bands of the last 10 years but it’s hard to overlook the album is missing an extra sprinkling of magic.