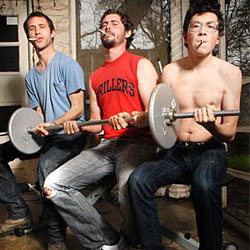 White Denim have announced they are readying their fifth studio album and have been working on it with none other than Jeff Tweedy at Wilco’s renowned Chicago headquarters and studio, The Loft. The sessions have produced two fully realised tracks for their as yet untitled new album, due for release later in 2013.

“We’ve always had a very D.I.Y. approach to recording. Early on, it was because of necessity but we always liked the idea of being a D.I.Y. band. So it was mind-blowing to go from that to recording in The Loft.”