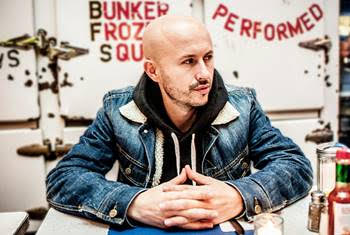 Shot during Wax Tailor’s last US tour, this series of interviews aims to give voice to actors of the music scene whom we don’t hear a lot from. He visited Black Dots Records, Charlemagne Record Exchange, Hymie’s Vintage Records, Jerry’s Records, Luna Music, Madcity Music Exchange, Papa Jazz Record Shoppe, Record Exchange, Repo Records, Schoolkids Records and Wax’n’Facts, to speak with the owners of each store and find out what drives them to get up every morning to sell records in a world increasingly dematerialized.

To showcase his love for vinyl records, Wax Tailor is offering purchasers of his latest vinyl LP By Any Beats Necessary a chance to win a special customized edition of Gramovox’s Vertical Turntable. Purchasers of the LP can enter the draw by emailing a proof of purchase by December 10 to vinyl@waxtailor.com Winners will be announced on December 12.

Wax Tailor fifth studio album By Any Beats Necessary was released October 14th. The title references the Malcolm X phrase “By Any Means Necessary”, which was in turn inspired by Sartre’s play “Dirty Hands”.

“Without going too deep into poilitics, the album’s title reflects my determination to use all kinds of sounds and textures to get to something musical,” says JC Le Saout, the man behind Wax Tailor. “The word ‘Beat’ also draws a line towards the Beat Generation, Kerouac’s famous novel On The Road, and the quest for a better place. And so, in this time when each of us needs a little escape, I conceptualized this album as the soundtrack to a better elsewhere that I imagined to be the south western part of the USA”.

This new take on the western frontier leads us on a fabled road where blues, psychedelic rock, soul, funk and hip-hop collide.

Joining him on this ride are guests such as Ghostface Killah from the Wu Tang Clan, R.A. The Rugged Man, who crosses mics with up and comers A-F-R-O & Token, in a showdown for the ages. The album also features Tricky in a very personal duet with Charlotte Savary, Lee Fields, the godfather of the retro soul scene, Sara Genn, Mattic and Raashan Ahmad and newcomer Idil.