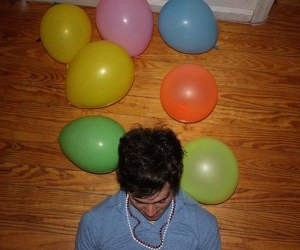 Washed Out is thrilled to share the “It All Feels Right” lyric video, the lead single from his forthcoming album Paracosm. The animated video, directed by Ferry Gouw (Major Lazer, MAD DECENT), is comprised entirely of the art from the album cover, and sets the lyrics of the song against a backdrop of psychedelic floral imagery in a kaleidoscopic swirl. Watch it now above.

Washed Out has scheduled a month-long, late summer tour in support of Paracosm.  The tour begins August 24th in Monterey, CA at First City Festival and runs through September 23rd in Carrboro, NC at the Cat’s Cradle. There will be a special fan presale for these shows beginning Wednesday, June 12th at WashedOut.net, with tickets available to the general public beginning Friday, June 14th.  Highlights for this tour include: August 25th in Los Angeles, CA for FYF Fest;  August 31st in Seattle, WA for Bumbershoot; September 6th in Portland, OR at Musicfest NW; September 8th in Sacramento, CA for Launch Festival;  September 14th in Detroit, MI for Laneway Festival; and September 18th in New York, NY at Terminal 5. Please find updated tour dates below. There will be additional dates to come.

Washed Out will release Paracosm, the follow up to his critically-acclaimed debut album, Within and Without, on CD, LP and digitally on August 12th in UK & Europe via Weird World and in North America on August 13th via Sub Pop Records. Paracosm, led by the single “It All Feels Right,”  was recorded by Ernest Greene with returning producer Ben Allen in Athens and Atlanta, Georgia.

The music recorded by Ernest Greene as Washed Out has been nothing if not dreamy, but for his second full-length, he’s taken the idea of letting your mind wander to another state a huge leap further. On Paracosm, the Georgia-based musician explores the album’s namesake phenomenon, where people create detailed imaginary worlds. The concept has been used to describe fantasy lands like Tolkien’s Middle Earth and C.S. Lewis’ Narnia, and it’s at the heart of the 2004 documentary In the Realms of the Unreal about outsider artist Henry Darger (read more at Sub Pop).