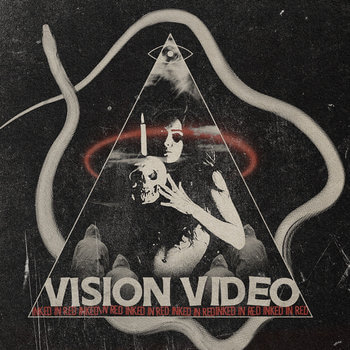 Athens, Georgia outfit, Vision Video have forged a debut album that explores the notion of trauma and how certain life events can leave permanent scars on the mind. ‘Inked in Red’ is a brooding concoction that’s built on juxtaposition, with a narrative that’s intense and hard-hitting, while sonically the LP is danceable and upbeat, in a kind of jerky post-punk-cum-goth-rock-pop kind of way.

Frontman Dusty Gannon is a person that’s no stranger to the darker side of human behaviour, having served in Afghanistan with the US Army and is now an active paramedic and firefighter. Suffice to say Gannon has seen things that most people will have only witnessed in films and on TV.

‘Inked in Red’ is a record that draws inspiration from distressing incidents and is littered with references to struggles with mental health, self-doubt and nods towards Gannon’s time in the military. The starkest and most direct acknowledgment to the latter is ‘Organized Murder’, a track that ploughs the darker furrow of wiry post-punk, with razor sharp guitars slicing through glacial synths, cyclical bass and motorik drums. The frontman’s lyrics focus on the scenes and notions of war “gunfire blasts out the beat/on and on/and on” and the disturbing “will our children have to die today?” typify the horror of being in active combat. ‘Kandahar’, named after a city in Afghanistan, offers a bleak recollection from the frontline, as taut post-punk is intertwined with the harrowing snippet of “did you see the broken bodies lying there?” as the band’s vocalist documents his time in the Middle East. ‘Broken Fingers’ hinges on Gannon’s current post as a fireman and paramedic, as he bluntly states, in his dramatic Ian Curtis-cum-Morrissey delivery “another death/another day”, while expressing “I don’t even feel” later into the track, like a man who’s become numb to the tragedy he witnesses on a regular basis. Elsewhere on the album, the themes become open to interpretation, not focussing on war and life events but the aftermath that’s left in its wake. The album’s eponymous track, with its glistening guitars and swelling synths, recounts how life can take its toll on all of us “history has drawn its lines across my face” and the dejected “you can’t be done when I’ve got nothing left to give” exemplifying the weight on Gannon’s shoulders. Via the poppiest song on the album ‘Comfort in the Grave’, Emily Fredock (keys) takes over on vocal duties, with synths shuffling to the forefront, coaxing in a dancier angle to the band’s sound. The feeling of being exploited and having trust abused comes through as the keys player chimes “betrayal buried here forever in this place”.

Vision Video’s leader wants ‘Inked in Red’ to serve as catharsis to the listener or as he puts it “I wanted to write music that helped people remember that it’s okay not to be okay”. With their primary outing, Gannon and the band have achieved just that.