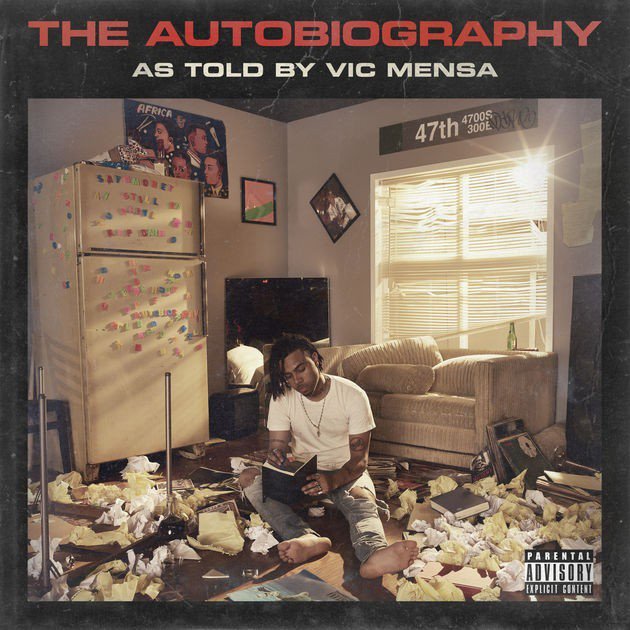 Vic Mensa’s in a good spot. He was recently featured on Kanye’s high-profile record The Life of Pablo and recieved a Grammy nod for his work with the rapper on “All Day.” He also released two EPs, There’s Alot Going On and last year’s The Manuscript, both to critical acclaim. The former XXL freshman has been riding the wave of hype leading up to his much-anticipated debut The Autobiography, which is set to either make him or break him as an emcee. Unfortunately, it doesn’t quite hit the mark. It’s a respectable effort from Mensa that ultimately fails to live up to the high expectations set for him.

The album opens strong with “Didn’t I (Say I Didn’t),” a soul sampling nostalgia trip that would make his mentor Kanye proud. While Mensa has the good sense to open the record with one of its best tracks, it doesn’t quite match the rest of the album’s tone, which relies more on rock and roll samples and sung quasi-romances than traditional record bin samples. “Memories on 47th Street” is much more in line with the rest of The Autobiography, featuring stories about Mensa’s adolescence in the Hyde Park area of Chicago and his experience with drug abuse.

Vic Mensa’s strongest suit on the album is on tracks like these, where Mensa plays oral historian of both the personal and the political. Standout track “Homewrecker,” which features an oddly fitting interpolation of Weezer’s “The Good Life,” is a tall tale of relationship troubles and an over-the-top kitchen wrestling match with a former flame. “Heaven on Earth,” whose chorus is sung by the always-reliable The-Dream, recounts a story of Mensa’s lost friend Killa Cam (no, not the one you’re thinking of) from three different perspectives. And debut single “Wings” is a harsh self-examination that sees Mensa struggle with self-doubt and pose big questions like “Will they love me when I die? / Will I ever learn to fly?” It’s earnest, to be sure, but Mensa’s delivery sells it.

The other more emotional tracks on the record don’t quite reach the same level. “Coffee & Cigarettes,” which is almost entirely sung, survives on the strength of Mensa’s vocal skills, though it verges just a little bit into saccharine territory. “We Could Be Free,” on the other hand, dives right in, featuring such groaners as “We could be free / If we only knew we were slaves to the pains of each other.”

His forays into more traditional radio-friendly territory also don’t fare too well. “Rollin’ Like a Stoner” is a drug anthem that’s more D.A.R.E. than dangerous, but the juxtaposition between music and lyrics never feels quite right. “Down for Some Ignorance” is equally off putting, featuring a dragging Chief Keef hook and one of Mensa’s laziest flows. It feels like he included these tracks in an effort to assure that the album would have radio singles, but his trips down memory lane feel much more natural.

The Autobiography features some of Mensa’s strongest work yet, but it’s dragged down by weak songs, middling production, a bizarre track sequence which places gentle ballads right next to bombastic radio bangers, and cheesy similies that stick out like sore thumbs. This autobiography could use some rewrites.