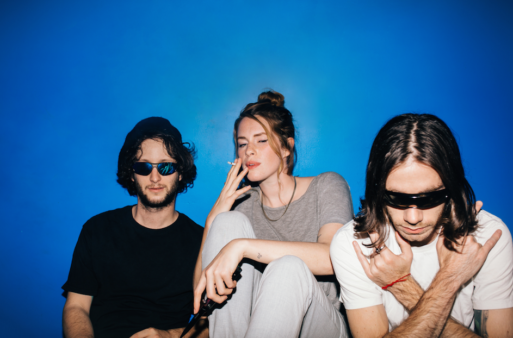 Vexxed are Max Steen (bass, production), Zach Sewall (keys, vocals) and Lucy Stone (vocals, guitar). Sewall and Steen met when they were 5 years old in Hebrew School and grew up playing music together—eventually becoming estranged and reuniting in Philadelphia in 2014. Steen met Stone through Sewall, who offered him a room in her North Philadelphia apartment. The trio coalesced—and that winter, Vexxed was born,the band name taken from a humorous appreciation for the Affliction clothing brand and the Travel Channel program Ghost Adventures. Snowed in during winter storm Juno, the trio hunkered down, spending all their time together. “The songs are a result of a blizzard.” The band’s Thank You Sooo Much, arrives on May 4th via Rare Mp3’s

Today, the band are sharing the lead-track “Heavens Away Team”, which the band talks about below:

The opener “Heavens Away Team,” finds inspiration in the Heaven’s Gate cult. “[The title] is funny and fucked up,” Steen starts, “but it’s so genuine and scary,” Stone finishes the thought. “Prince of Darkness,” was inspired by Zach’s translation of the Book of the Dead come to life—“There were a lot of strange happenings around the writing of that song. Once we heard a really painful, crazy sound out of the monitors. At that point, I looked out the window and there were two black cats looking in,” he recalls. “I opened the door right next to the window and they weren’t there.” Steen jumps in, “The book said something like ‘beware of cats and metallic sounds’—exactly what happened in that moment. A weird prophecy.” He pauses, “We don’t know if we’re trapped in some weird spirit realm…or if we should stop smoking weed.” The EP ends with “Gimme the Money,” a welcomed, sultry, high-spirited respite Stone lovingly refers to as “our club banger.” At it’s heart, of course, is humor: “I was thinking of Tom Hanks in the movie That Thing You Do,” Steen jumps in. “That song is part Jerry McGuire, sunglasses, and Lucy being pissed all in one.” Vexxed is a project of friendship, humor, isolation and curiosity—and their idiosyncratic pop brings it all together. Thank You Sooo Much doesn’t ask anything of the listener, but it offers much: a sonic hybridity inspired by life’s biggest questions and moments distilled into something digestible and wonderful. Listen, and be transported.

Tracklisting:
1. Mood Ring
2. Heavens Away Team
3. Prince of Darkness
4. Yr the Only One
5. Gimmie The Money