With live dates opening for Arcade Fire coming up next month, The Unicorns have announced a reissue of 2003’s acclaimed Who Will Cut Our Hair When We’re Gone?, their third and final album. The digitally remastered version, due out July 29th, contains four bonus tracks: a live version of “Haunted House,” recorded March 29, 2004 at Seattle’s Crocodile Cafe, a previously unreleased cover of Daniel Johnston’s “Rocketship,” “Let Me Sleep,” a never-before-released track from the WWCOHWWG? sessions, and “Evacuate the Vacuous,” an outtake from the WWCOHWWG? sessions that was originally released as part of the 2014 EP by Suicide Squeeze and has been remastered for this release.

The Unicorns’ cover of Daniel Johnston’s “Rocketship” is currently streaming below. You can pre-order the digital reissue of WWCOHWWG?  here. 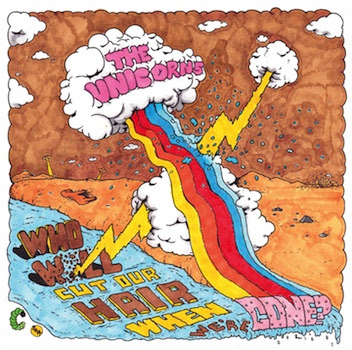 The Unicorns reunite next month for the first time in a decade, for five live dates opening for Arcade Fire: two at The Forum in Los Angeles, CA, and three nights at Brooklyn’s Barclay’s Center. In addition to these five shows, they’ll also be performing live at POP Montreal in September. See below for a list of dates, along with WWCOHWWG’s track listing.

Who Will Cut Our Hair When We’re Gone? Track Listing