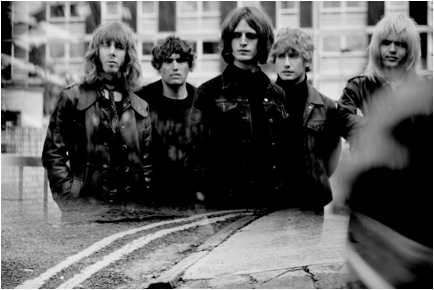 UK band Toy’s new album toy Clear Shot (released October 28th on Heavenly Recordings) is being described as a Beefheart corruption but Toy’s third LP represents the band’s fullest interrogation yet of more local, rain drenched and mushroom speckled Anglo-mystic roots… through Radiophonic Workshop, Comus and Fairport, COUM and Acid House all the way back to the druids, dragging stones and chanting under the astronomical symphony of early Time.

Toy released their self-titled debut in 2012 and cemented their reputation as the best alternative rock band in the country with Join the Dots at the end of 2013 Now in the bad half of their twenties, they’ve had a personnel switch and grown up. The headlong motorik rush has been exploded to reveal gem-like shards of synthesizer symphonic and heart-bursting vocal harmony. These have been glued into strange and wonderful shapes by lilting 3 and 6/8 time signatures provided by drummer Charlie Salvidge. As is signalled deftly at the midpoint of its eponymous opener, Clear Shot marks a fracturing and a change of pace; transit conditions in their lives have fostered the best music they’ve ever made.

The band have taken inspiration from favourite bygone groups and bunkered down together. In a makeshift studio at guitarist Dominic O’Dair’s flat in Walthamstow, they laid out the first Clear Shot demos, splitting their time between there and a place in New Cross that singer Tom Dougall and bassist Maxim Barron had moved into. The sprawling, old house also contained Max Oscarnold of The Proper Ornaments, who they’d got to know through touring together, and his piano and acoustic, Byrds-leaning sensibilities bled into communion with TOY’s guitars and synths. At Dom’s, in something of an homage to the experiments of the Manson Family, early Disney and Bowie’s Beckenham Arts Lab, they routed cables through each room to a bank of recording equipment. They’d been reading a lot and going out slightly less, and it had enabled some fertile experimentation.

“One of the books we all swapped around was Electric Eden by Rob Young,” says Barron, “The sound of folk music and how it progressed in a modernising world interested us and the idea that people were looking back to forms of music that were in danger of being forgotten, looking back at a golden age. Bands like Incredible String Band, The Langley School’s Music Project and The Wicker Man soundtrack were on quite a bit and I think that influenced the sound in some way.”

“Another book we were reading was Wreckers of Civilisation: The Story of COUM Transmissions,” says O’Dair, “I think their story has been an influence and is almost a continuation from the folk thing. The Death Factory where they lived is in Hackney.” The group, having grown up in sunny semi-utopian Brighton, have all lived in London for quite a long time and by now relate easily to the concept of Industrial Music and that experiment where all the lab rats ate each other.

This free thinking Ken Kesey stuff was going on when they weren’t gorging on film noir. The scores of Bernard Herrmann, John Barry and Ennio Morricone have seeped in just as much as the cannon of well-regarded UK avant freaks, and the tone of the record is acknowledged on its sweeping seven minute closer ‘Cinema’. Just as elsewhere a sense of epic spectacular confronts a keen intimacy. This feeling is helped no end by Chris Coady (Beach House, Smith Westerns, Yeah Yeah Yeahs) who mixed the album in LA, with some of the reverbs and vocal processors used on Purple Rain. They provide a sheen that complements Dougall’s melodies, which are particularly expressive this time around. TOY are working both in bigger colors and more minutely crafted detail, achieving an altogether higher level of artistry than before.

Recent outings between the alternating demands of tour van and studio have given slight nods to this expansive new direction. Prominently, there was the Sexwitch project with Natasha Kahn (Bat for Lashes), in which they refracted global psychedelic cuts to delirious effect, and their instrumental re-work Join the Dubs. In addition to tinkering on an MS20, a KORG Delta, a Phillacorda and a Farfisa, they’d lately become fixated with a Sequential Circuits Pro One, a Prophet 6 and reel to reel tape loops. Charlie Salvidge got deeply into field recordings and they had originally expected Clear Shot to sound more electronic than their earlier work. They were not unhappy when instead, the record started to take on a lushly cinematic, symphonic form. Strands of ideas appear, sink and re-emerge in an almost modal jazz manner; subject to some gnomic process, deep and stoned-sounding.

Teaser ‘Fast Silver,’ is a shoogle-y darked-out affair, it’s reminiscent of the best night driving music, that bends between cavernous minor and warmly radiating major sections. There’s an instrumental bridge that sounds like Amon Tobin and a middle 8 that sounds like The Stranglers’ Dionne Warwick cover. It’s utterly brilliant and truly weird. Sibling tracks on the record include ‘Jungle Games’ and ‘Spirits Don’t Lie.’ Peculiar, idiosyncratic creatures, they share something with the end-of-the-sixties, year zero feel of the Beach Boys’ Surf’s Up; somewhat broken and disillusioned, long shot of the urge to please.