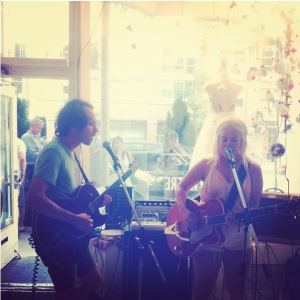 Twist is the new project from Laura Hermiston and Brian Borcherdt from Dusted and Holy F**K. Laura and Brian met in Toronto after Laura played a show with her punk band, BB Guns. Brian approached the band about producing their record. The two became close friends and Brian became someone Laura went to for songwriting advice while recording BB Guns. Upon completion, Laura brought the new songs she was working on to Brian and they jammed them out for fun. They used a 1982 drum machine, distorted their vocals, and fuzzed out their guitars. The following week they went into a big warehouse converted studio and recorded six bed tracks.  The outcome was low-fi, ghostly, and grungy, but all with a hint of Lee Hazelwood and Nancy Sinatra. The two spent the following months working on a record together and unintentionally Twist had formed.

Twist are ready to share their first single “Where to Lie”. The track is available for free download HERE. They have also released a video for the song which premiered this week.

Twist plays Toronto on January 17th and then will take their show on the road in 2014.