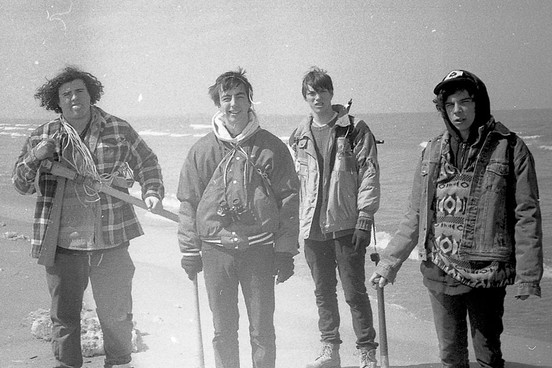 Northern Transmissions recently chatted with Cadien Lake James from the band Twin Peaks. Their upcoming album “Sunken” comes out in a few days via Autumn Tone.

Cadien Lake James: We actually got together in our earliest incarnations when we were sophomore in high school; me and Jack (bass) had been playing together since 5thor 6thgrade, and we hooked up with Connor (drums) and our buddy Lucas in high school. Our guitarist Clay came into the equation from another band in our high school “scene” when we were going into our senior year, and Lucas left the band this past December when the remaining four of us dropped out of college. So Twin Peaks proper has been playing for around two years now.

NT: Are you surprised how fast things are happening for you guys? The band has already been covered by NME and you’ve recently played shows with Beach Fossils and Deer Tick.

CLJ: I don’t think we had any doubt that we would be able to achieve some level of recognition, even if it halts at where we’ve got now, so I’m not necessarily surprised by that, but I am surprised by how fast things happen once you’re in the game. We felt like we were getting buzz when we self released Sunken a year ago and did a house-show tour last summer, but looking at the opportunities that have come up for us just since SXSW this March it’s definitely apparent that the momentum builds once you get your foot in the door or whatever. Mad grateful!

NT: You are re-releasing “Sunken” on Autumn Tone. Were you guys not happy with the original recording?

CLJ: The Sunken on Autumn Tone is just a mastered version of the original we recorded last summer — before Autumn Tone had even reached out to us last Fall I had already started working with my close friend Ziyad Asrar on beefing the tracks up a bit, and when we realized the album would have a wider market and be online and on vinyl etc. we just felt it would be worth it to tighten things up. Sometimes I still favor the original un-mastered Sunken though, they’re pretty similar but the original is a little scuzzier which I dig.

NT: The band has a single coming out on Mom + Pop as well. Can you tell us about the track?

CLJ: We haven’t decided on an A/B-side yet, but one of the tracks is a song called Flavor that I wrote about the presence of rave culture around me going to an inner city high school with dub step blowing up after I had seizures my senior year of high school — I’m not sure what caused them but having seizures definitely made me take the destructivity of rave drugs people around me where doing more seriously

NT: Can we expect a package tour of Chicago’s finest, you and the Orwells?

NT: What were you studying in college before you decided you wanted ‘Twin Peaks’ to be your priority?

CLJ: Well our original keyboardist Lucas is actually still at CalArts following his heart and studying film! Clay was studying film as well at USC in LA, and the other three of us were up in Olympia, WA at Evergreen State, ending up in some interesting classes — Jack was studying the psychology of horror through film in the past century, Connor was in a civil-rights class, and I was making sin waves through terminal on my computer..

NT: Which five albums from your collection continue to inspire you.

Dark Side Of The Moon – Pink Floyd