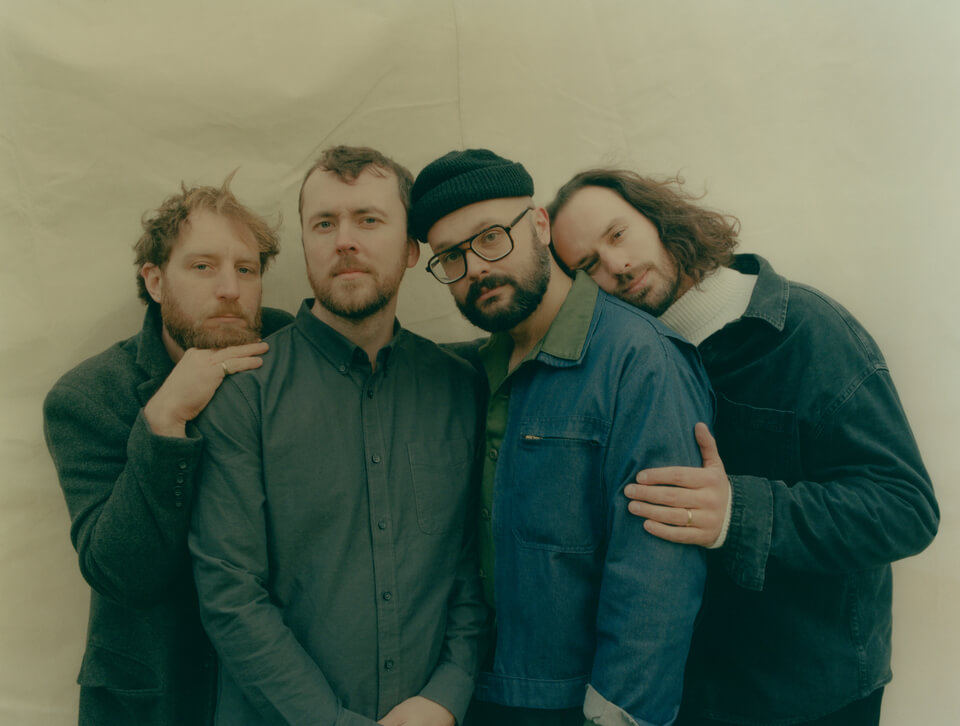 Certain records have the ability to sonically punch you in the gut. Not in a literal sense, but more of in a way that it gives the listener a jolt right from the first note, maintains that feeling and by the end of it there’s a lasting impression. This is usually accomplished through a combination of amplification and vigor, which is something London post-punk act TV Priest are really good at. Their sophomore release My Other People came out via Sub Pop Records on June 17 and when you plug in and press play you’ll know what I’m talking about. In my opinion, it’s one of the best albums to come out during the first half of 2022.

I had a chat with frontman Charlie Drinkwater about the making of the album, the band’s first show being in a freezer, getting signed to Sub Pop and hoping the honesty of the music gets noticed.

Northern Transmissions: Did you guys aim to do anything differently during the recording process for My Other People than what you did during the sessions for your debut album Uppers that came out last year?

Charlie Drinkwater: Yeah, it’s a lot more live as a recording process. Nic [Bueth] who plays bass in the band is also our producer as well so he produces and engineers everything so we kind of did everything ourselves. With the first record, Uppers was written in a slightly weird way where we had a little studio but it was really, really small and it was the sound of the band trying to make a live sounding record without doing any of it live. It was all kind of tracked and we had to go in to do bits and bobs separately so with My Other People I think we wanted it to be a bit more organic of a process. A lot of the new album came from us playing together and having an opportunity in a larger space to be able to play with each other and riff, jam and get a feeling of
each other as players.

Uppers by its nature was a bit more like including this guitar part, then going in and doing this vocal part so this time it was a bit freer in a way. We had never done it that way before so I suppose it created its own atmosphere as to how we worked.

NT: What do you think are the similarities between the new album and the debut in terms of themes, lyrical subjects or just in a musical sense?

CD: I think similarities wise there’s a particular sound that I think the rest of the guys make. It’s a driving sound, there’s the rhythm section, the bass and how they work together. Nic plays a six- string bass guitar as well which gives us a level of having a sound that’s almost like a rhythm guitar without having it, it’s quite unique. I think those things stayed similar, for me vocally there are still moments where I’m perhaps letting it rip in a more aggressive fashion but I also think we tried some new things. We didn’t want to entirely chuck out the DNA of who we are and how we make music, I think we also don’t have to be considered to do that.

You make the music that you make with the people you make it with and it comes out in a certain way while sounding a certain way because of that. I think you would have to be almost too cynical to try to change certain aspects of your sound. There’s still an element of us being a band and playing as a band that informs the sound.

NT: I totally get that. The way you sing is fairly unique due to how you have an operatic croon while also letting your British accent shine through with a little bit of a drawl. Who or what do you consider to be your main inspirations for your vocal approach?

CD: There are similarities and comparisons that are made to post-punk bands of old who we obviously are massive fans of. For me, in the early ‘70s there was a big pub rock scene in the United Kingdom with bands like Dr. Feelgood and stuff that was based around that rhythm & blues kind of style. There’s another band called The Screaming Blue Messiahs that I really love, they’re kind of forgotten but they had this jammy stuff with raw raspy vocals. I’d be remiss to not mention Nick Cave and stuff like that, also my grandfather was a big influence on me in terms of how he listened to a lot of big band singers. People like Tony Bennett and Frank Sinatra, I love the technique that they inhabit.

I suppose as well people like Grace Jones, Grace has this weird way of singing that’s also very powerful while having an operatic and slightly dramatic vibe. She never strayed into the territory of being a farce, it’s believable and it comes from within. I think I resonate with singers who showcase that, even when you listen to a Frank Sinatra or a Tony Bennett song you can hear the enthusiasm. They’re singing from a place of experience and to me that’s something I resonate with.

NT: That authenticity you’re talking about definitely translates from those influences to you in my opinion. TV Priest started out in a peculiar way in how you played one gig in an industrial freezer in 2019 before getting signed to Sub Pop. How did you guys go from playing a gig like that to being part of one of the most legendary independent labels on the planet?

CD: It’s really weird, I’ve spoken about it a bit before but this band that I’m in with these guys is the only band I’ve ever been in since we were 15. We played together pretty consistently up until our early 20s, then we kind of went away a little bit, lived our lives a bit and we all did different things. A couple years ago we were all getting a bit older, we had more time pressures and life catches up with you. I suppose we weren’t seeing each other as much and I think music had always been a point that came back to our friendship. We were all kind of in a similar location geographically, some of us had moved away for a bit and come back and I think we just missed hanging out and playing music.

We just started playing really and there was an impetus in that as well because we were a bit older, we have families, kids, jobs and things that are happening in our lives. It also gave us somewhat of a routine and that’s where we had the idea to record an album so it gives us a goal as it were. Previously we just drifted a little bit, we’d come in, we’d jam, we’d drift so we had this goal of writing an album and it was weirdly pure in a way. It was making an album for the sake of making an album, we’re obviously really lucky that Nic has producer chops and can do that within the band so it facilitated a DIY sense. In terms of how that translated into being signed to Sub Pop, we played this gig in literally a freezer unit from the back of a track but it was plunked from the car.

CD: It was around the corner from our little studio, I think Nic talked to the guy who owned it at a bar one day and they were like “Cool, ok. You can have this space for 50 quid if you bring your mates down.” We put that show on ourselves just for our mates really to prove that we were a band. When we did that, a friend of a friend invited a guy down who is one half of this really small indie record label. He came down and we didn’t really know them or know that he was coming and he just took a chance on us. After the show, he told us he liked our stuff and he wanted to press it to vinyl.

Because of that we ended up on a radio spot play at a radio station called Radio 6 Music out of the BBC with a guy named Steve Lamacq who is kind of a legendary DJ. One of the two people who work for Sub Pop in the United Kingdom heard us on the radio, I think his wife heard us first and said “Hey, you’d like this”. Then he took it to the label and a week later it was mental, they called us up and offered us a record deal. If you wrote this in the script of a film people would say “That’s not how it happens” but it was really insane. Like you say, it’s a legendary label and it’s something like when you’re a kid you’d say “Oh, I’d love to be on that record label” and it happened to us in our early 30s at a time when we were all in lockdown because of the pandemic. To have this happen to us is kind of like “Woah, what’s going on man?” in a juncture of our lives that I don’t think any of us will easily forget.

CD: You can probably tell that I’ve told it a few times.

NT: Yeah, I can tell. For those who haven’t given My Other People a listen yet, what do you hope they take from the album?

CD: The main thing for me is that I hope that it’s honest. All of us are trying to communicate a set of emotions. A lot of our music deals with time and space, I use music and art as kind of a therapeutic form to deal with things that I’m going through or my friends are going through so I inject a lot of my own psyche and self into it. I suppose regardless or not you like music, you like the record or perhaps you like the first record more, I hope you can take away that it was written and recorded in the sincerest fashion.That’s what I hope it translates.

Order My Other People by TV Priest HERE