After nearly a decade, Fog is back. Andrew Broder’s project has been tough to trace, leaving a trail of albums, each considerably different than the last, on notable electronic labels before disappearing like its namesake. But For Good is as much a return to what the Minneapolis auteur does best — piano, turntables, and voice caught up in a gorgeously taut swirl — as it is a foray into music without precedent: digital soundscapes seamlessly wed to guitar, bass, drums, violin, sax, and synths. It snaps, pops, and bangs its way out of speakers like urgent, beat-fired balladry, both coolly inventive and warmly emotive. Even as these songs tackle themes of profound disquiet, they go down with a newfound ease and poise, making For Good a fine analog to Broder’s career — unusual beauty springing from inward agitation, hard-fought contentedness winning in the end.

It’s the sad/pretty pop of Antony and the Johnsons, Bon Iver, or Julia Holter spliced with the new noise of Arca, Shabazz Palaces, and Oneohtrix Point Never. Broder flexes his knack for better mood-building through collaboration and collage. His Twin Cities geniuses pitch in — Mark Erickson, Tim Glenn, Jeremy Ylvisaker, Mike Lewis, et al. — plus Dntel and Doseone (behind the scenes) and violinist Leah Ottman.

For Good’s sonic focus isn’t a surprise. In 2015, Broder produced a bleak-banging rap tape for MC Crescent Moon, covered Beach House and FKA Twigs on Soundcloud, and dropped a five-cassette drones-and-beats set for the heads. But the production here is also cleaner than ever, and likewise the vocals, which Broder honed most recently fronting his rock-ish band the Cloak Ox. The lyrics showcase an eye for observation and introspection that makes cousins of Bill Callahan and Phil Elverum, and if there’s a heaviness haunting the words, it’s the workingman’s wont. After holding a series of random, short-lived side jobs, Broder learned a trade so he could better support his family — he’s a handyman and commercial painter back home. But in giving more of his time to the grind, he conversely found himself at his most musically inspired. That push/pull is a crux of the new Fog.

Broder recorded parts at Justin Vernon’s April Base compound (with basketball breaks) and Eau Claire studio Hive (where co-producer Brian Joseph actually keeps bees). But the album was made mostly in Broder’s basement, in the company of his space heater and 3-year-old boy, Sonny. 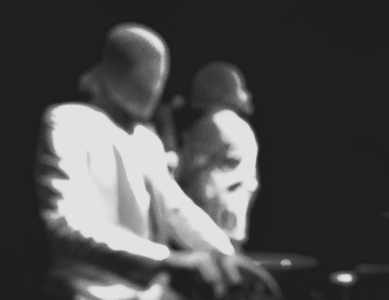 Review of ‘när-kə’ The New LP By Pony Bwoy