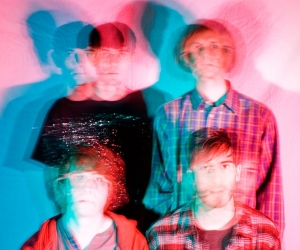 Tripwires spent the last six years refining their widescreen rock sound in Reading, England. Not because they clearly spent their formative years watching its world renowned music festival. More like the simple fact that being from a truly sleepy commuter town—one that’s been denied city status not once but three times—has let the band develop their debut album, the aptly titled Spacehopper, on their own terms.

Or as the longtime friends (frontman Rhys Edwards, guitarist Joe Stone, bassist Ben White and drummer Sam Pilsbury) put it, “A lot of people live here a couple years for work and then move on. For us, it’s been a great place to write music. Not as a direct result of the environment around us, but in a way that’s encouraged us to provide our very own soundtrack to growing up.”

As for what that entails, the group is quick to name-check everyone from Neil Young and Yo La Tengo to the Flaming Lips and Sonic Youth. Not to mention countless strains of Krautrock and the two albums they can all agree on: Talk Talk’s Spirit of Eden and 666, a demented double LP from the Vangelis-led Aphrodite’s Child collective. While those artists may read like randomly selected record store references, Tripwires’ debut album doesn’t quote anything directly. Subconsciously maybe, but never as a nod to anyone but themselves, whether they’re sampling interstellar static (“Slow Mo”), dodging dollops of feedback (“Plasticine”), or floating through power chords and thunder-clapped storm clouds (“Spacehopper”).

“The main strength of this band is our closeness as friends,” they explain when asked about the individual strengths of each member. “It’s allowed us to stay strong as a unit, with very little influence from people on the outside. It’s pretty hard for anyone to worm their way in and gain our trust.”

“We’ve always joked that we wanted parts of our songs to sound like a hairdryer to the face,” they explain. “Having said that, we’re really interested in exploring how simple and stripped-back we can make things, using both approaches to make things sound as diverse as possible while still sounding like ‘us’.”