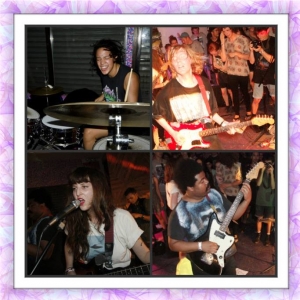 Total Slacker has a thing for Olive Garden. It’s not just a passing interest or something—next time you talk to Tucker Rountree, their towheaded, lanky frontman, ask him about never-ending pasta bowls and Zuppa Toscana and unlimited breadsticks. He’ll tell you about his ongoing attempt to throw a rock ‘n’ roll show at a Queens Olive Garden, which culminated in a series of phone calls made to corporate centers, demanding answers to questions like: Do you understand the sociological effect that Olive Garden has had on Western culture since the 80s? What are the conceptual underpinnings behind breadsticks?

Beyond casual American dining, Total Slacker has a thing for the 90s. But rest assured, their new record Slip Away, which comes out 02.11.14 on Black Bell/ADA, isn’t the sort of hack revivalism that’ll make you want to burn your copy of Bleach. For the album, Total Slacker dug deep into the crates, and came up with something that sounds like Hum and Skywave a bunch of other bands that’ll draw blank stares from nu-gaze numbnuts. Most importantly, they retain their original ethos—to blur the lines between the genuine and the satirical, the earnest and the sarcastic… the shrimp and the scampi.

The band was incubated in New York City, after Tucker met bassist Emily Oppenheimer at a local Laundromat. The pair considered being in a band as an end goal in itself, and began their career without much direction or professionalism. The group released their lo-fi debut, Thrashin’, on Marshall Teller Records in 2011, earning a reputation as a vicious live act by playing more than 350 shows—which often feature flaming guitars, smoke machines, and smashed instruments—in under three years. In the wake of the album’s local success, the band was struck with tragedy following the death of their drummer, Terence Connor, who was struck by a hit-and-run in early October of 2012. They went into the studio within two months, laying down tracks that dealt with that confusion, transposing vague childhood angst into tangible, real-world issues.

Throughout the album’s 11 tracks, the quartet (rounded out by guitarist David Anthony Tassy and drummer Zoë Brecher) makes a potentially futile stab at a life lived in harmony with gargantuan multinational corporations. But don’t worry – recorded with care by Daniel Schlett (DIIV, the Men) at Strange Weather Studios in Brooklyn, Slip Away also features songs centered around the Kennedy assassination, ThighMasters, and fighting your babysitter’s boyfriend.