Angelo De Augustine’s Tomb was produced by Thomas Bartlett (aka Doveman), whose credits include work on albums for St. Vincent, Sufjan Stevens, Glen Hansard, and Rhye). The album arrives on January 18, via Asthmatic Kitty. It’s 12 songs came together quickly, out of necessity following his first true heartbreak around Christmas 2017 — and while Tomb was born from this breakup, the album expanded to explore years of loss and disappointment. Ultimately the album reflects a beginning for De Augustine — both emotionally and in his career. “It’s a motion towards positivity, addressing lost love, the worthwhile cost of honesty, and the ramifications of regret. In the end, ‘Tomb’ isn’t about burying or hiding something away, it’s about opening the seal and letting something new emerge. The album’s title reveals these sentiments: “Throughout our lives we bury many dead things in our hearts and minds,” he says. “There they go to rest and hopefully are reborn as something beautiful for the world to behold.”

Tomb reflects a beginning for Angelo — both emotionally and in his career. It’s a motion towards positivity, addressing lost love, the worthwhile cost of honesty, and the ramifications of regret. In the end, Tomb isn’t about burying or hiding something away, it’s about opening the seal and letting something new emerge. It’s about telling people how you feel when you feel it, instead of burying everything over the span of years. Like the best heartbreak albums, Tomb transforms inward pain into universal beauty. The songs have helped him to heal and now they can help those who hear them. “This album is, at its core, a prayer for hope and clarity, and a prayer for love,” Angelo says.

As a teenager, he dreamed of being a professional soccer player and even reached the international circuit before being derailed by an injury that left him unable to play. Soon after, a friend of the family gifted him a guitar and his dedication to soccer was replaced with singing and songwriting. Though he would spend his late teens writing and performing, collecting gear and learning how to self-record in his bathtub with an analog reel-to-reel tape machine, it wasn’t until his debut album, Spirals of Silence, that Angelo realized how transformative a song could be. His 2017 sophomore album and debut for Sufjan Stevens’ Asthmatic Kitty Records, Swim Inside The Moon, affirmed Angelo’s gift for intimate, emotionally raw songwriting. His sweeping, minimalist songs that steal into listeners’ hearts have since piloted him to tours with Moses Sumney and The Barr Brothers, headline shows in the U.S. and Europe, and a spot opening for Stevens’ Planetarium concert at Hollywood Forever Cemetery 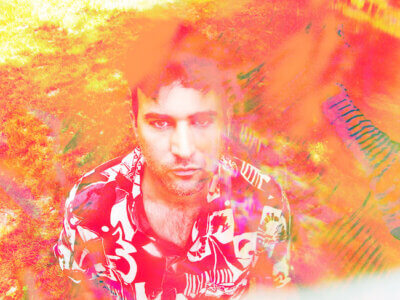