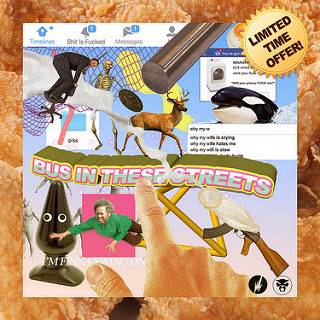 “Bus In These Streets” is a comedic ode to our dependence on technology, and is the first officially released new music from Thundercat since his 2015 mini-album The Beyond / Where The Giants Roam. The track features Thundercat (vocals, bass), Louis Cole (keyboards, drums, programming) and Steve Ellison aka Flying Lotus (programming, editing), and the artwork is by Thundercat’s friend Bootymath.

Earlier this year, the Brainfeeder veteran won his first Grammy award for his contribution to the track “These Walls” from Kendrick Lamar’s To Pimp A Butterfly. Since the release of The Beyond / Where The Giants Roam—the album that featured “Them Changes”, Thundercat has guested on Comedy Central’s Why? With Hannibal Buress; cult late-night talk show The Eric André Show and premiered the animated video for “Song For The Dead” via Adult Swim.