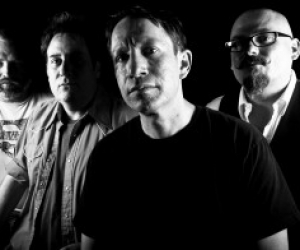 What’s In Between, their new album due out on June 25.  “Conversations” focuses on the more traditionally Midwest alt-rock sound reminiscent of the Replacements instead of the more Stooges-driven sound of “Terra Nova”. The band is also starting to hit the road so check below for current dates.

The Pedaljets originated in Lawrence, Kansas in 1984 and were one of the “almost famous” alternative acts of the 1980s – a missing link between The Replacements and Nirvana. From their beginning, the Pedaljets toured the country nonstop, often opening for the likes of Hüsker Dü, The Flaming Lips, The Replacements, Meat Puppets, and other usual suspects of 1980s alternative/punk America. They released two full lengths – the first, Today Today, on Twilight Records in 1988 to great accolades and the second LP, Pedaljets, was released on Communion in 1989 but was rushed out as an unfinished, poorly realized “what might have been” of an LP. The Pedaljets LP garnered solid national attention and good reviews, despite its flaws. After six years of almost nonstop touring and born upon a deep disappointment with this second LP, the Pedaljets quietly disbanded in July 1990. Ironically, at the time they broke up, the Pedaljets’ flag was flying higher than ever. They were on MTV and packing clubs around the country; even the opening montage of credits on Saturday Night Live featured a quick shot of a Pedaljets poster.

Now fast-forward to winter 2006, when rumors began circulating around Kansas City about some kind of a quasi-Pedaljets reunion. As the story goes, one of the 1980s more enigmatic bands temporarily had re-emerged to seek a sort of rock-and-roll redemption – a cathartic cleansing consisting of playing together again, drinking like they shouldn’t, and correcting old mistakes. The tapes for the old Pedaljets LP were unearthed and taken back into the studio where the songs were polished, fixed, and given new arrangements. After a successful re-release and a few shows, the band decided to return to the studio in late 2009 to record a few new songs that main songwriter Mike Allmayer had written. Original Pedaljet lead guitarist Phil Wade was unavailable, so this time around Paul Malinowski (also bass player for Midwest rock titans, Shiner and Season to Risk) assumed second guitar duties, as well as performing all recording/engineering. After recording 15 tracks in several KC studios, the band went up to Brooklyn to have John Agnello (Dinosaur Jr., Sonic Youth, The Hold Steady, etc.) mix at Headgear Studios and Archer Prewitt (of The Sea and Cake), who had done art for the original and re-released Pedaljets albums, was recruited again to do the new art. The results are astonishing. Each song is at once vintage Midwest in-your-face rock and a totally new approach to what is timeless and resonant and beyond conventional formulaic alternative pop and rock. The guys have learned something after all these years.