The Naked and Famous Debut Song ‘A Stillness’ 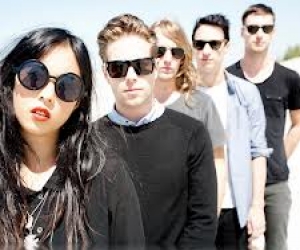 New Zealand quintet The Naked and Famous have debuted the first track, ‘A Stillness,’ off their forthcoming sophomore album, In Rolling Waves, out via Republic on September 17th. According to the band’s songwriter/producer Thom Powers, ‘A Stillness’ is “a song about overcoming catastrophizing, re-discovering love, stability, security, calmness…I think it’s about not abandoning. It’s about dealing with your own sense of hopelessness.”

Fronted by Powers (guitar/vocalts) and Alisa Xayalith (vocals/keyboards), The Naked and Famous lit a fire under an online fan base, with a video subculture built through YouTube and into radio. M83 invited TNAF to remix a single and a Tiesto remix transformed ‘Young Blood’ into a club smash. By June 2012 the band, including David Beadle (bass guitar), Jesse Wood (drums) and Aaron Short (keyboards), had played to more than 600,000 people in 24 countries, and after two years of near-constant touring, set up home in Laurel Canyon, Los Angeles to begin work on the twelve track album. The resulting album, In Rolling Waves,  was produced by Powers and Short, along with Justin Meldal-Johnsen (M83, Beck and NIN).

In 2013, the band will commence a North American tour in late September before heading to Europe and arriving in the UK late November. Dates below.