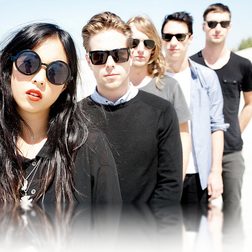 New Zealand quintet The Naked and Famous are pleased to announce the release of their sophomore album, In Rolling Waves, via Republic on September 17th, 2013. The album  follows the band’s debut Passive Me, Aggressive You.

Fronted by Alisa Xayalith (vocals/keyboards) and Thom Powers (guitar/vocals), The Naked and Famous lit a fire under an online fan base, with a video subculture built through YouTube and into radio. M83 invited TNAF to remix a single and a Tiesto remix transformed ‘Young Blood’ into a club smash. Twelve months previously, the band, including David Beadle (bass guitar), Jesse Wood (drums) and Aaron Short (keyboards), had been writing and recording songs in bedrooms on Auckland’s North Shore.

After two years of near-constant touring, the New Zealand five-piece set up home in Laurel Canyon, Los Angeles to begin work on the twelve track album. The resulting album, In Rolling Waves,  produced by Powers and Short, along with Justin Meldal-Johnsen (M83, Beck and NIN) with co-production on two tracks, delivers darkly nuanced, intricately rocking electro gems once again born in bedroom studio sessions, then demoed in studios in Wales and Australia ahead of recording at Sunset Sound in Hollywood.

11. To Move With Purpose