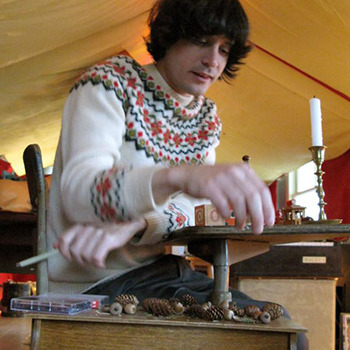 As a thank you to the fans who funded the show’s creation via Kickstarter and as a celebration of the launch of their new arts organization, The Orbiting Human Circus, The Music Tapes have announced a special, limited engagement run of their very first theatrical production, The Traveling Imaginary, September 3-6 at the 133rd St. Arts Center Lab in New York City.

As soon as audiences walk through the door, they will be greeted with The Music Tapes’ surreal, carnival-esque games before entering a specially-made circus tent for an immersive, dreamlike show that includes songs from the band’s newest album Mary’s Voice, antique 16mm cartoons, virtuoso Klezmer music performed on the singing saw, Julian Koster’s unique narratives about dehydrated European cities and half-imagined children’s games, a 12-foot snowman, and an array of mechanical contraptions like Static the Singing Television and the 7-Foot Tall Metronome.

Developed during a residency at Bard College’s Richard B. Fisher Center for the Performing Arts and funded by fans via Kickstarter, The Traveling Imaginary was produced by the newly-formed theatrical company The Orbiting Human Circus, an outgrowth of The Music Tapes that creates narrative and musical works for the stage and radio, original games and amusements, records, mechanical musical inventions, and more. Its creation was a longstanding dream of The Music Tapes’ front man Julian Koster, who says, “We want very much to thank everybody for making this year happen. It’s been one of the most special years in my life. I cannot be more literal when I say that The Traveling Imaginary coming to life and the Orbiting Human Circus becoming a real organization are two dreams come true.”